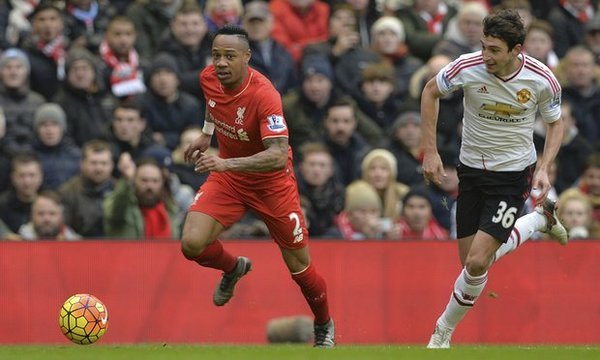 Technically it’s the Europa League, but come this Thursday it’s going to have a distinctly Northwest flavour when Manchester United visits Anfield for the first leg of their Round of 16 tie — the first time these two have ever squared off in a continental competition.

“This is why I signed for such a big club, to look forward to nights like this,” fullback Nathaniel Clyne told the club’s official website. “I’m looking forward to it, I relish it, and hopefully we’ll complete the job that’s there for us,” enthused the defender. “It’ll be good for the fans if we can beat our rivals in Europe,” he continued, before adding, “That’s what we’re looking to do and hopefully we will.”

This Red Devils side may pale in comparison to the rampaging juggernauts of the past 20-years, but they’ve yet to lose to their bitter rivals under Louis van Gaal and have already done the double over the Anfield outfit this season — something Clyne is keen to pay them back for.

“I think we owe them from the Premier League games, which we probably should have got more out of. But we have time now to put things right and [make sure we] progress through the cup,” explained the 24-year old. “We’ve learned to just keep fighting to the end. We know we can create chances and if we’re solid in defence we can stop their attack,” he mused. “Hopefully we can get the goals and get a good result going into the second leg it’ll help us push through to the next round.”