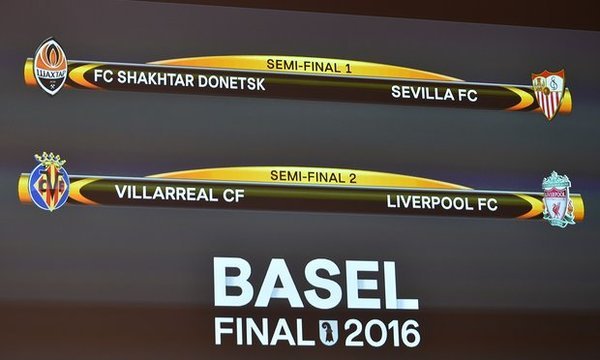 After Liverpool defender Dejan Lovren’s late header sealed a dramatic win for Jurgen Klopp’s side over former team Borussia Dortmund in what was a pulsating Europa League quarter-final at Anfield last night, the Reds have been paired with Spanish outfit Villarreal CF in the semi-finals with the two clubs meeting for the first time in competitive European competition.

Avoiding a tricky trip the Ukraine with Shakhtar Donetsk drawn against holders Sevilla in the other match-up, Liverpool will visit El Madrigal stadium for the first leg on April 28th with the return fixture back on Merseyside set to take place one week later. Securing home advantage for the second round in a row, should the Reds progress to the final, they will also be considered the home team in what will be only a symbolic gesture as the showpiece event will take place in Switzerland at St. Jakob-Park in Basel.

“We are happy with the draw,” said ex-Villarreal captain and now club representative Marcos Senna. “We did not want to meet Sevilla, we want to meet them in the final,” mused the Spaniard, thinking ahead to Brussels and a showdown with the back-to-back Europa League winners. “We’ll try and win home leg, without conceding an away goal to make it easier,” he continued, not even pretending that pulling a result at Anfield will be easy. “Then we know it will be difficult away.”

Dispatching the likes of Bayern Leverkusen, Napoli and Sparta Prague en-route to the final four, Marcelino García Toral’s side have been in fine form with their fourth place spot in La Liga – eight points above their closest chasers – dismissing any passing suggestion that they’re just focused on the cup. Despite their impressive run, history is against the team affectionately known as The Yellow Submarine; winless in their last ten meetings with English opposition, Villarreal will be hard pressed to snap their spell of bad luck against a Liverpool side that’s been completely galvanized by an amazing come from behind victory over the tournament favorites, but if the events at Anfield last night taught us anything, it’s that nothing at has been decided quite yet.