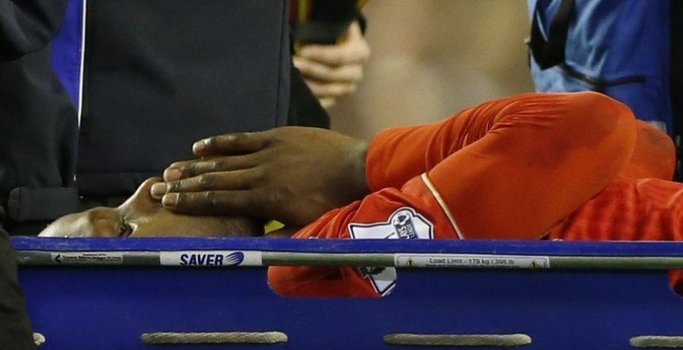 Although it’s hard to say for certain just how long Liverpool striker Divock Origi will be sidelined for after being stretchered off in the Reds emphatic win over bitter rivals Everton at Anfield last night, but his prognosis seems to be better than expected with news filtering through that he’s suffering from a really bad sprain ankle as opposed to a full blown break.

“I would like to say yes, I am delighted, but the injury to Divock Origi has cost me some joy,” said Jurgen Klopp following the final whistle. “The first half was a derby, it was wild from Everton, not patient enough. We could have played better but scored two goals,” he said matter-of-factly. “The second half the game changed completely, they had no chance any more. It’s really great I would like to say but I cannot ignore this situation.”

The Belgian opened the scoring and Mamadou Sakho added another before the break, but only minutes into the second half Toffee’s defender Ramiro Funes Mori was dismissed — and left the field looking foolish, kissing his badge on the way to the tunnel — for a horrendous tackle on the youngster. Liverpool may have coped just fine without the Belgian, adding two more goals through Daniel Sturridge and Philippe Coutinho, but with a whole pile of important fixtures just over the horizon, his absence could be a serious problem.

“The situation with Divock Origi is not good,” conceded Klopp. “The first reaction was maybe it’s broken but it’s not broken. The ankle is twisted so we have to see. The season is only four weeks. I am happy that it is not broken,” he continued, taking a small measure of solace in that fact. “When you want to have success you need luck with injuries. Seeing him on the floor is not too nice so I couldn’t enjoy the second half too much.”