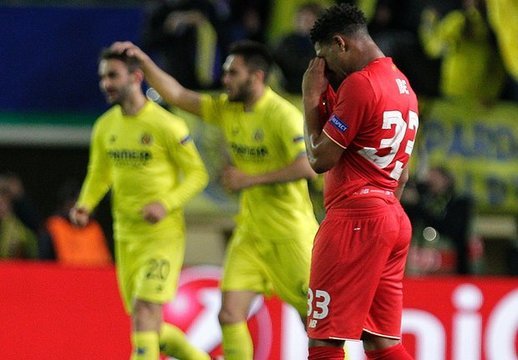 Liverpool may have arguably been the better side throughout the 90-minutes, but a lack of concentration well into second half injury time saw Villarreal CF land a late body blow to hand the Reds their first defeat in Europe this season and send the tie back to Anfield with the Spanish side in the ascendancy.

We knew this would be a cagey affair and lived up to the billing right from the start with the momentum swinging either way only for short periods with neither side able to assert their dominance. Cedric Bakambu hit the woodwork with a glancing header from Jonathan dos Santos corner early in the second half and Roberto Firmino saw an effort of his own blast off the base of the post after being put through by James Milner, but the action really didn’t pick up until the closing stages.

Simon Mignolet was on hand to deny Bakambu with a fantastic save after Denis Suarez, who was dangerous on the night, sent him clear with a cute ball through the Liverpool back-line. The Reds would look to respond through Christian Benteke, but the Belgian’s header from Milner’s cross was directionless at best. Either way, it’d be Alberto Moreno that’d decide this one with a 5-minute display that perfectly summed up the Spaniards tenure at Anfield thus far.

Not long before Benteke’s header, the fullback latched on to a mistake from Suarez deep in our own half before turning on the afterburners for a full on sprint up the pitch. We’ve seen him do this before; looking every bit like he was going to grab the all important away goal, the 23-year old instead lashes his shot high and wide to leave Villarreal ‘keeper Sergio Asenjo untroubled. Fast forward a few minutes later and Moreno is dawdling up the field as Suarez squares for Adrian Lopez to tap home and give Marcelino Garcia Toral’s the momentum.

“Of course I’m not too happy with the goal we conceded in the last second,” Reds boss Jurgen Klopp told BT Sport following the final whistle. “Counter attacking in the 92nd minute makes not much sense but it is only the first leg,” mused the German manager. “It is 1-0 and they have to come to Anfield where we know how strong we are. We had our moments, we defended really good,” he said, before adding, “This race is not over.”

Philosophical from the man in charge, but he’s right, of course. Still, losing it late at El Madrigal in such dramatic fashion did absolutely nothing to make the already hard job of torpedoing the Yellow Submarine any easier. With that being said, one only needs to look back on the previous round to know that Liverpool are an altogether different beast at Anfield. There’s no denying that Villarreal have a significant advantage, but do they have what it takes to capitalize on it?