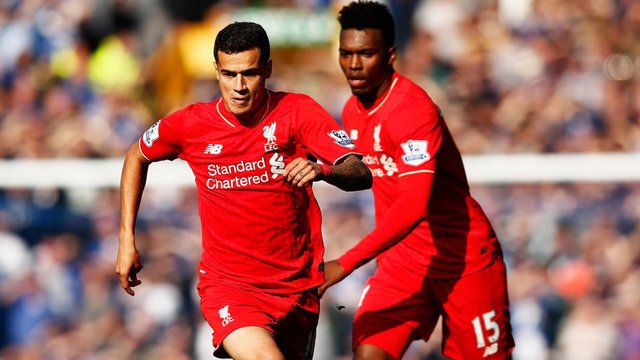 Although it looked like Liverpool were playing for a draw in the last gasp 1-0 loss to Villarreal CF in the first leg of their Europa League semi-final with the Spanish side, Reds boss Jurgen Klopp explained that dropping Daniel Sturridge from the team to play Roberto Firmino as a false-nine in his place was down to tactics and formation than anything else.

?It was a very difficult decision,? the German manager told BT Sport when asked about the England man dropping to the bench. ?It was for a little bit more stability. In a 4-3-3 we haven?t played with Daniel. So we thought that for today, 4-3-3, 4-5-1, sometimes a diamond, this very flexible style that we have played in a few games it makes sense,” continued Klopp. ?We have a very good bench, so we can react in the game.?

The Liverpool boss was forced to do just that at half-time with Philippe Coutinho, who failed to make an impression during the opening 45-minutes, withdrawn for youngster Jordon Ibe — a move that elicited more questions than answers. There were concerns that the Brazilian attacker had suffered some sort of muscle injury, but it’s now believed that he was feeling unwell to the point that he was unable to continue.

While that could very well rule him out of the meeting with Swansea City in the Premier League on Sunday, the trip to Wales won’t be at the top of Klopp’s list of priorities. Having given up a last gasp winner to the Yellow Submarine, pulling off a win at Anfield in the return leg will be far more important to the Reds season with a spot in the final just begging to be won. A goal behind, Liverpool are going to have to come out of the gates firing and that’ll be a lot easier if Coutinho is ready to go.