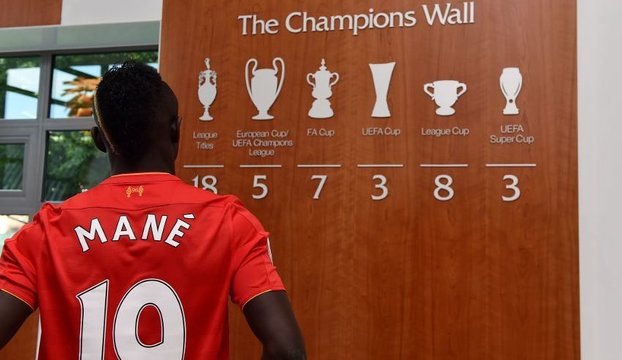 Following a well worn path from the South Coast to the North West, Liverpool have confirmed the capture of Southampton wide-man Sadio Mane for a fee believed to be in the region of £34mil — making him the fifth Saint’s player to make the move to Anfield in the last three years and boss Jurgen Klopp’s fourth signing of what’s sure to be a busy summer.

“I knew Liverpool were interested in me, I had some [other] opportunities, but I think for me this is the right club, the right coach and the right moment to change,” said the Senegalese attacker, speaking with the club’s official website for the first time. “I am very happy to be a part of Liverpool Football Club,” enthused the 24-year old. “He [Klopp] said he wanted me to come to play for Liverpool. I didn’t even have to ask myself, I said straight away ‘yes, I am interested’ because I know Liverpool,” continued Mane, quick to point out the importance the German manager had in making his decision. “I am convinced Liverpool are the right club for me with the right coach.”

While there’s sure to be some raised eyebrows at the price-tag, there’s no doubting that the Reds boss has recruited a player that fits his style perfectly. Eclipsing the fee that Manchester City paid Swansea City for Wilfried Bony last January, Mane is now the most expensive African player in history with a transfer fee that — depending on whom you believe — could rise to as much as £38.5mil depending on appearances, trophies and European success. The 24-year old showed that he’s no slouch during his two years at Southampton, but he’ll be expected to raise his game at Liverpool — if not by his new boss, than certainly by the media.

“Yes, absolutely,” said the Reds attacker when asked if he’ll be able to bring his eye for goal to the Northwest. “I am happy because as a striker – and not only for me, but for all strikers – it is very important for you to score for your team,” continued Mane. “Now I am looking forward to working with my new teammates, to playing with my team and trying to help each other to push the club upwards.”