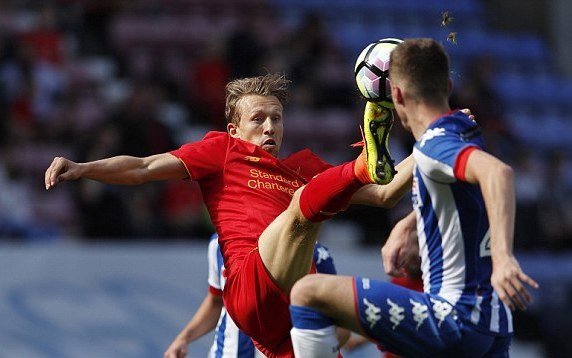 Late last week the media with abuzz with news that Liverpool were ready to accept £800,000 to send long serving midfielder Lucas to Galatasaray on a season long loan, but it now appears that the Reds would prefer a permanent move with the Turkish side still interested in hashing out terms with the Anfield outfit.

“That will happen, a few things will happen I am pretty sure,” said Liverpool boss Jurgen Klopp, answering questions about transfers after the win over Championship side Wigan Athletic. “I don’t know exactly what but on both sides,” continued the German manager, refusing to name names,” it makes no sense to stay in the squad and be in the squad when you don’t have a real opportunity to play.”

Although he’s featured in each of their pre-season friendlies — including yesterday’s win over the Latics — the Brazilian appears to be surplus to requirements on Merseyside and is expected to be shuffled on before the transfer window closes. Galatasaray, at this point, are still favourites to sign the 29-year old, but Turkish champions Besiktas are also believed to be in the running after missing out on taking him in on loan last summer. Lucas, for his part, has already admitted he’s unsure just where he stands in the squad and with competition for a starting spot set to be as fierce as ever with the Reds sitting out European competition for the coming campaign, it would be no surprise if he ends up leaving.

“We have a few players, maybe who want to leave us and I am pretty sure it will happen – and one or two more players will join us from other clubs,” continued Klopp, keen to point out that there’s still a lot of business to be done. “It’s a long time until the 31st of August and we have to work a little bit.”