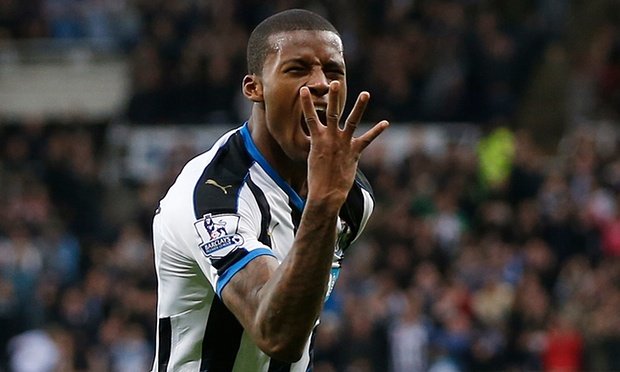 Although Premier League rivals Tottenham Hotspur and Everton are reportedly keen on taking in recently relegated Newcastle United midfielder Georginio Wijnaldum, Liverpool have apparently moved in to pole position to sign the 25-year old with the Reds prepared to splash out serious money for the Dutchman.

Keen to add more goals to the Anfield outfit, Liverpool boss Jurgen Klopp has already brought in Sadio Mane from Southampton as one of four players signed since the German took over on Merseyside last October and he’s rumoured to be ready to part with somewhere in the region of £20mil to add the hard-working midfielder to that list — that is, if even can convince the Magpies that they want to let him leave St. James Park.

“He’s a professional – a very good player, which we know. He’s training well, which is good for him and also for the team,” said Newcastle boss and Reds legend Rafa Benitez when asked on Friday about the Dutchman’s future. “I’ve had these situations in the past with players,” added the Spaniard, staying calm about his squad and the club’s chances of retaining their best players. “Some can get disappointed, but we are a group of professionals and still they have to keep working.”

It’s been nothing but radio silence coming out of Wijnaldum’s camp since the Magpies were relegated from the Premier League, but it’s believed that he’s not only keen to make the move to Merseyside, but just to get out of the Championship in general. Having moved form Dutch side PSV Eindhoven last summer for £14.5mil, the powerful midfielder knows a thing or two about playing top level football and he’ll be looking to do just that under Klopp. The Reds are set to complete the signing of FC Augsburg defender Ragnar Klavan in the coming days with the Estonian due in town for a medical later today with a view to hooking up with the club before they leave on their pre-season tour of the United States and if all goes to plan they’ll be hoping that Wijnaldum can do the same.

One thought on “Wijnaldum Still Avoiding the Press, Staying “Professional” Despite Relegation”