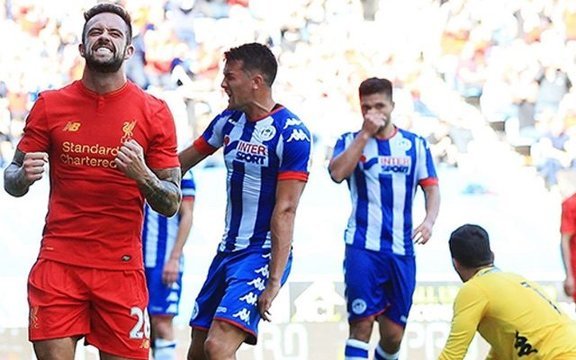 Liverpool striker Danny Ings is wasting no time getting down to business — both in training and on the pitch. Forced to watch from the sidelines after picking up a season ending knee injury only days after Reds boss Jurgen Klopp took over in October, the 23-year old is keen to show the German manager that even though he hasn’t been playing, that he’s been paying attention.

“The training is very intense, very tactical and we’re learning every day,” he told the club’s official website. “I’m playing catch-up really because I obviously didn’t get to train with [Klopp] and the other staff, and get to see the methods. What I did do was watch from the sideline and try to pick up as much as I could. I’m just trying to put that into games now,” explained the 23-year old. “My biggest aim is to get fit and get to how I was before I got injured.”

If you’re not going to pull any punches, Ings should have at least three goals already; having smashed home a real peach against Tranmere Rovers, the former Burnley forward missed a penalty against Fleetwood Town before getting back on terms by breaking the deadlock in the 2-0 win over Wigan Athletic at the weekend. Considering he hasn’t played any competitive football since scoring against Everton in the fall, that’s a pretty decent haul — one that he’ll be more than happy to add to as pre-season rolls along.

“I could have scored a few [at Wigan], as I could have against Tranmere and in the last game. I’m just happy to be out there and feeling sharp,” enthused Ings, sounding as humble as ever. “Injuries are horrible for every player. I’ve had injuries in the past and I’ve always said that we earn our money when we’re injured, because it’s the hardest time,” he added. “Playing football is the easy part because you’re enjoying it. I’m just glad to be back out there – I can put all that behind me and keep scoring goals.”