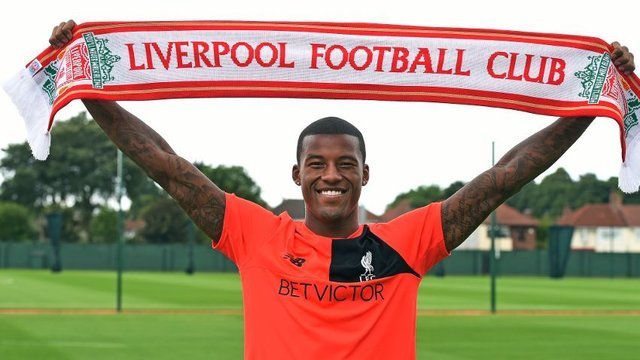 It’s been a busy week at Anfield — after confirming they’ve drafted in FC Augsburg defender Ragnar Klavan on Wednesday and the unexpected capture of veteran ‘keeper Alex Manninger early Friday morning, the Reds surprised no one by closing out the work week by announcing that Newcastle United midfielder Georginio Wijnaldum had joined the club on a long term deal.

“I’m really excited because Liverpool is a big club with a great history and it’s always a dream to play for as big a club as Liverpool,” enthused the Dutchman, speaking to the club’s official site after putting pen to paper. “[He seems] a great man – from the outside – because I don’t know how he works yet and I have to work with him,” said Wijnaldum when asked about Reds boss Jurgen Klopp and what he expects from the charismatic German. “[But] I always love to watch him, his passion as a trainer, I like how he enjoys the game. He gives something back to the group [with his passion] so I look forward to working with him.”

Although Liverpool has been linked with the 25-year old in the past, news that they were interested in drafting him in to the side this summer only broke on the weekend and talks between the two sides progressed rapidly with the Anfield outfit keen to speed the transfer along. Having left for their pre-season tour of the United States on Thursday morning, Wijnaldum is expected to fly out and meet up with the squad by Monday ahead of their first match in America against Premier League rivals Chelsea mid-week.

“I am so happy that we have got him and he can join us now in the USA,” said Klopp after the signing was confirmed. “I think he can be a great player for us. He has already shown some really good moments in his career but the most exciting and important thing for me and my staff is that there is still so much extra to come from him,” continued the German manager. “When I talked to him I could tell that he knows we have to work together to get this level out of him to all be successful for the team.”