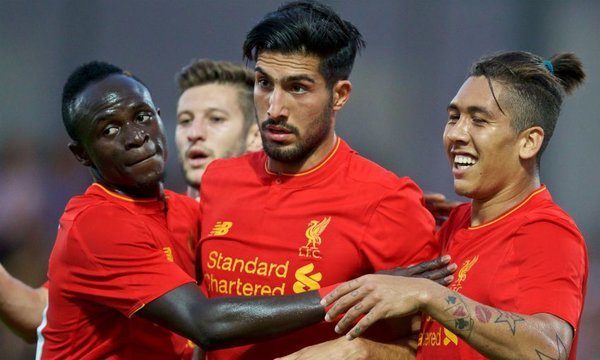 After a disappointing trip to Turf Moor at the weekend ended with newly promoted Burnley FC pulling off a shock result as Liverpool fell to a 2-0 defeat, the Reds got things back on track by securing their spot in the third round of the League Cup in emphatic fashion with a resounding win over Championship side Burton Albion.

Basically, the Brewers just couldn’t cope; Divock Origi, restored to the starting eleven despite Liverpool boss Jurgen Klopp expressing concerns over his form earlier in the weekend, got the visitors underway when his flashy backheeled effort snuck past Burton ‘keeper Stephen Bywater before Roberto Firmino doubled their lead with a well placed header not long after. Emre Can’s flick from a James Milner corner forced an own goal from defender Tom Naylor and Daniel Sturridge, fresh off a frustrating appearance on Saturday, rounded out the scoring by adding the fourth and fifth from the bench.

“This was a very serious, professional display from our side,” Klopp told Sky Sports following the final whistle. “There were nice goals – nothing to criticise. It was humid today – not easy for either team,” explained the German manager, obviously pleased with this performance. “We gave a few players match-time because that’s important. Some only got minutes in pre-season.”

Now, it’s easy to say that it’s only the League Cup, it’s only a Championship side, it’s only this or that or the other thing, but the age old adage of only being able to beat what’s in front of you certainly comes in to play here — and, it also sells this performance short considering we absolutely pummelled them.

With a tricky trip to Tottenham Hotspur on the cards for the weekend, this was the perfect opportunity to put the disappointment of losing out to Burnley behind us, but at the same time, it shouldn’t be used as an meter stick to judge how we should be performing at the weekend. With that being said, there’s tons of positives to draw from this performance.

We knew we could score goals going in to this one, so we’ll leave that off the table for the time being; with the news that Mamadou Sakho could go out on loan still fresh in the mind, seeing Joel Matip come in to the starting eleven was as welcome a relief as seeing Sadio Mane back on the pitch after he picked up a shoulder injury in training last week. Likewise having Emre Can in the mixer gave us a good indication that the German would be back in contention for a starting spot sooner rather than late — you know, that is if the knock he picked up in the latter stages isn’t serious.

One thought on “Burton Albion (0) Liverpool (5): Reds Cruise to Third Round of League Cup”