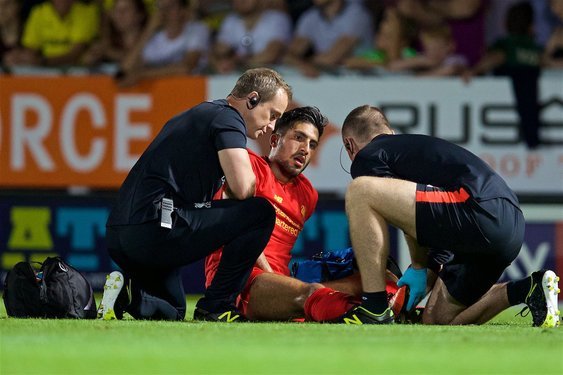 Liverpool may have got a timely reminder that they can score goals and be dominant in the same match when they ran out 5-0 winners over Championship side Burton Albion last night, but they were also brought back up to speed on the kind of problems all of these matches can cause when Emre Can hobbled off in the latter stages of the second half.

“He over-stretched,” explained the German manager, speaking to Sky Sports following the final whistle. “He had some problems with his ankle earlier. He wasn’t in too much pain though,” added Klopp, though he refused to brush it off as only a minor knock with a trip to Tottenham Hotspur looming at the weekend. “It is the ankle he had problems with last season; we all hope that it is not too serious.”

The Reds midfielder, who has been used sparingly since the start of the season as he looks to build back up his match fitness following a summer spent with the German national team at the European Championships, appeared to catch the turf with his studs before going down. Some lengthy treatment followed and though he tried to play on, he was replaced by youngster Kevin Stewart not long after.

If the knock Can picked up wasn’t bad enough, Klopp will also be sweating on the fitness of Divock Origi after the Belgian struggled through the closing stages with the Anfield outfit having already made all three substitutions. The Reds striker opened the scoring with a neat backheeled effort and was lively throughout, but the fact that he had to leave the pitch with five minutes remaining is concerning in and of itself. Although the manager confirmed in his post-match interview that Origi was suffering from cramp, being unable to complete 90-minutes throws up some major concerns over his fitness.