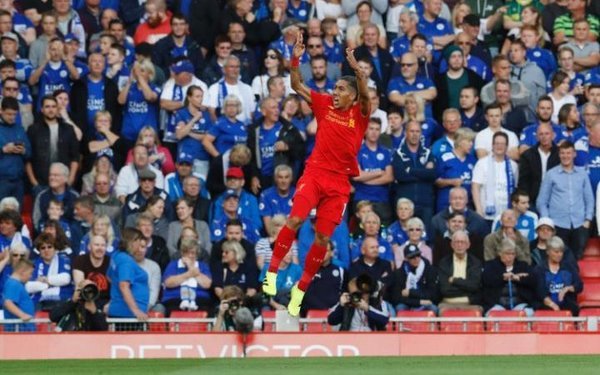 After bagging a brace against reigning Premier League champions Leicester City at the weekend, it’s safe to say that Liverpool attacker Roberto Firmino’s season has now well and truly started. Having struggled in the early days following his big money move from German side Hoffenheim last summer, the 24-year old is yet another example of a player to find his feet following the arrival of mercurial Reds manager Jurgen Klopp.

“I played against his teams for four-and-a-half years,” explained the Brazilian forward. “I know what he wants from a player. When I heard that he was coming to be Liverpool manager, I was so pleased. I could not have been happier,” enthused the Bundesliga export. “I knew what he was going to bring here. He brought a style of work and play from Germany and the team has adapted to it. Our friendship is crystal clear. There is nothing behind it. He is a great person. If you do what he asks you to do, you will never let him down,” added Firmino, before daring to dream. “Can he make me the Neymar of Liverpool? It all depends on me.”

Hardworking and intelligent both on and off the ball, the 24-year was initially labelled a “flop” by the British press before coming in to his own after Klopp set up shop at Anfield — something that prompted the wily German to have a bit of a laugh at the expense of the doubters.

“It wasn’t a surprise to me when I heard people questioning him. That’s how it is in Germany too,” said the Reds manager back in May. “I knew about Roberto. When I heard that Liverpool had signed him I thought: ‘how have they done this?’. Now with Roberto you can see the confidence in his work,” explained Klopp. “What we can learn from Roberto’s situation going forward when it comes to next season’s signings is wait to make judgements,” hinting towards the likes of Sadio Mane, Loris Karius and Joel Matip who were drafted in as the Merseyside giants flexed some muscle in the transfer market. “Don’t be too quick to judge players.”