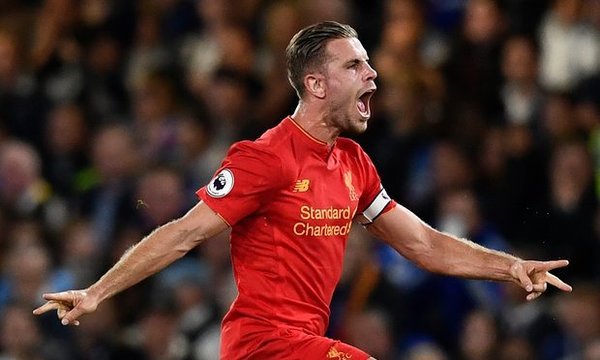 It’s a bit early in the season to talk about a team maturing or coming in to its own, but on the back of thrashing reigning Premier League champions Leicester City at the weekend, Liverpool put in an altogether different performance in West London to convincingly down Chelsea in the Capital.

Dejan Lovren, of all people, was on hand to open the scoring as the defender found himself in acres of space to side-foot home a peach of a cross from Philippe Coutinho as the visitors dominated the first half. Jordan Henderson, building on his imperious outing against the Foxes, bagged himself the eventual winner with a Goal of the Season contender. Though the hosts found themselves back in the thick of things through Diego Costa just past the hour mark, they remained far off the pace of a increasingly impressive Liverpool side as Jurgen Klopp claimed his second Premier League victory in as many trips to Stamford Bridge.

“It keeps our momentum going,” said the Reds skipper, speaking to Sky Sports following the final whistle. “We have been training well and I had a good feeling going into the game. We knew it would be difficult as Chelsea are a good side but I thought we defended well and deserved the three points,” added Henderson, barely able to contain a smile when asked about beating Blues ‘keeper Thibault Courtois from a good 30-yards out. “It was about time I got a goal but I always say the most important thing is the three points.”

On a different level for large swathes of the match, you’d be hard pressed — and flat out wrong — to say that Liverpool didn’t deserve that; on the back of such a tireless performance, it was the very least they should be leaving the Capital with. Our first half performance might have picked up where our win over Leicester left off, but when we refused to go to pieces after Costa got on the end of some good work from Nemanja Matic to notch his fifth of the year, we really looked like a side walking down the right path.

Chelsea may have looked lethargic at times, but when you consider that from the off they had the likes of Eden Hazard, Brazilian duo Oscar and Willian, as well as the previously mentioned free-scoring Spaniard and they were able to drag Barcelona alumni Cesc Fabregas and Pedro off the bench, even when they’re not firing on all-cylinders they still pose a massive threat. And, again, it’s far too early to start talking about our defensive problems being worked out considering the comedy of errors that lead to the Blues pulling themselves back in to the game, but when Simon Mignolet kept Costa from pulling Antonio Conte’s side level with a clutch save after the big forward was allowed to turn and shoot on the edge of the area, it felt like a corner turned.

Or, if you’ll allow a bit of poetry, a bridge crossed.

“Today we conceded the goals in a strange way. They took the free-kick quickly [for the first] and after a throw-in it was a great shot from a long distance but if we are in the right position he must not receive the ball unmarked,” said the Blues boss, speaking to Sky Sports about Henderson’s wonder-strike. “When you want to think like a great team you must pay attention in every moment what happens on the pitch” continued the Italian, obviously perturbed. “We played with good intensity and anger in the second half. We scored a goal and could have scored another with Diego Costa. We played a good second half,” added Conte before admitting that his team aren’t quite up to par quite yet. “I must work more to improve my players. Defeats are never good. We know this, we must work and keep our concentration.”

That the West London club barely had a sniff in the first half and that they were well marshalled throughout the second by both Lovren and the revelation that is Joel Matip will be a topic for the days to come, but it was a whole team performance — going forward, and going back. Watching all four of Daniel Sturridge, Sadio Mane, Adam Lallana and Geoginio Wijnaldum blaze a path towards the Chelsea goal on a blitz worthy counter-attack was just as satisfying for me as seeing James Milner take a corner at one end and seconds later be on hand at the edge of our own area to mop up yet another fruitless foray from our hosts.

That was the kind of cohesive performance that we need; balanced despite our top heavy, attack minded nature and a passionate as you’d be prone to see. That, my friends, is Klopp quality football and it’s only going to get better from here.