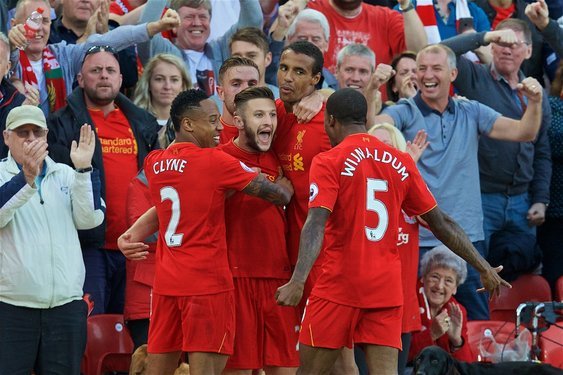 After putting in another stellar performance in the comfortable 2-1 win over Chelsea at Stamford Bridge on Friday, Liverpool attacker Adam Lallana has opened up over his new central role and his growing influence on the Reds style of play.

“I see a lot more of the ball,” said the 28-year old, happy to be finally proving his worth at Anfield. “When I was out wide, there would be periods in the game where I wouldn’t be as involved in the game as I would like,” continued Lallana. “I’m sure anyone would say they want to be on the ball as much as possible,” added the former Southampton captain. “In the central area I’m getting a lot more touches on the ball and I’m being able to use one of my qualities.”

Only teammate Sadio Mane has completed more dribbles than Lallana since the season started, but defender Joel Matip looked like he was going to take a run at both of them with the lanky Cameroonian showing his abilities both on and off the ball against the Blues. During a dominant first half, the Bundesliga import not only kept Chelsea danger man Diego Costa quiet, he also showed a penchant for carrying the ball out from the back leading to fans and pundits alike singing his praises — something that didn’t surprise Reds boss Jurgen Klopp one bit.

“If you lived or worked in Germany you would have known much more about him!” said the German boss with his trademark toothy grin. “It was pretty clear it would make sense to sign him,” said the Liverpool manager. “He had this surgery but it was not without complications. A little infection, so he needed time. Tall players like him need physical fitness. He needed to create some physical strength,” added Klopp, before dismissing any questions about the caliber of player they have on their hands. “But there was never a doubt about his quality. It’s very important because of the situation in the centre-half position.”