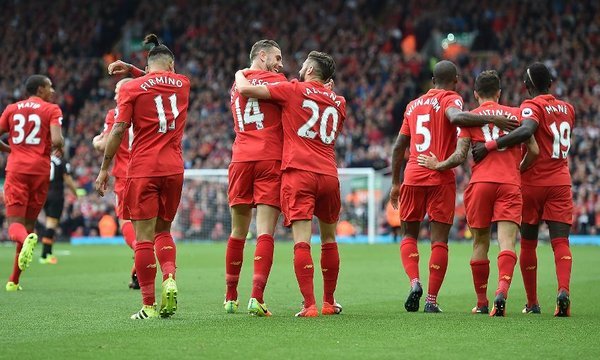 From the get go, it never looked like they had a chance; it was damage limitation almost from the off for visiting Hull City as Liverpool romped to their fourth straight victory on the hop and right in to the top four of the Premier League as the Tigers were left battered for the second week in a row.

Adam Lallana opened the scoring with a scuffed shot after a bit of trickery from Philippe Coutinho found the Reds attacker in space before things went from bad to worse for Mike Phelan’s side when Ahmed Elmohamady saw red for a deliberate handball in the box to open the floodgates. James Milner duly converted from the spot and Sadio Mane added another notch to his already impressive goal tally — and that was all before the break.

They’d go on to post an impressive 74% possession by the end of it, but Jurgen Klopp’s side weren’t done scoring. Hull midfielder David Meyler may have restored a touch of hope when he ruined the home debut for new ‘keeper Loris Karius by lashing a shot past the German, but Philippe Coutinho would restore the three-goal advantage with a trademark long range effort and Milner would add a second from the spot after Andrew Robertson tripped up Daniel Sturridge.

“The most impressive thing today was the counter-pressing in the game, with this big number of possession,” said Klopp with a smile. “I think it was the best game in counter-pressing that we have played until now,” added the charismatic German. “That was very important, because we scored the goals right and all that stuff, but winning the ball back in these moments is so important and it becomes really difficult for the opponent to increase confidence.”

While the Reds front line will obviously take the bulk of the plaudits, that was very much a victory built on teamwork with every single outfield player harassing, harrying and pressing their vistors in to making mistakes. He may have been wasteful in front of the net, but Georginio Wijnaldum once again proved the perfect partner for club captain Jordan Henderson as the two acted as a jumping off point for the Liverpool attack and were immediately off their marks as soon as we lost the ball.

Admittedly, the Tigers were as poor as we were good, and going down to ten men so early didn’t help matters, but that doesn’t subtract from the performance in the least. Klopp may have us in that all so important winning groove, but he’s made it abundantly clear that we have to work for each and every victory — and that’s exactly what we saw at Anfield yesterday. Instead of sitting back and protecting our lead, we chased every ball down like we were the ones behind; it’s that kind of mindset that will see this side go on to do great things.