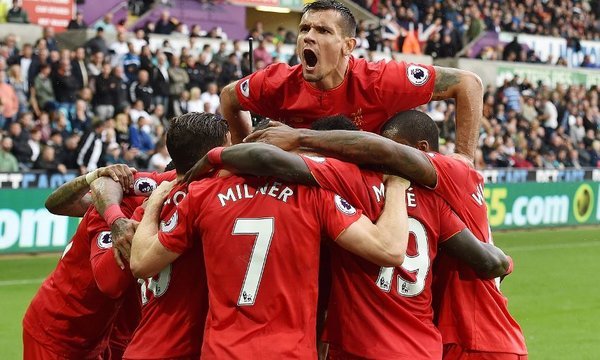 Well, it wasn’t the kind of swashbuckling display that we’re getting used to seeing from Liverpool, but the Reds were good enough to get the kind of result we’re coming to expect after a second half fight-back saw them take full points in South Wales.

While that’s good enough for me and probably you as well, it is a bit harsh on Swansea City with a marketed inability to capitalize on their chances their eventual undoing. It all started so well for the hosts with record signing Baston Borja nodding down from a corner for Leroy Fer to turn home less than ten minutes in to proceedings, but it was painfully obvious that when they failed to add to that lead before the break there was going to be major problems — and one arrived in the form of Roberto Firmino.

Maybe it wasn’t the kind of all-action display that’s quickly becoming our hallmark, but it certainly got the job done. The Brazilian, who has been a revelation since arriving last summer wasted little time, heading Jordan Henderson’s cross past Lukas Fabianski to restore parity not long after the restart before going on to earn the penalty that saw James Milner claim the winner a half hour later.

“Often I have to accept what I see, I cannot change a lot in a game,” mused Liverpool boss JUrgen Klopp, speaking to the press following the final whistle. “Half-time, I can change a lot, but only when the players have open ears. They have, so that’s good. It’s very important that on not brilliant performance days that you are still able to win,” continued the German. “It’s very important, always, because I have two hands and I’m pretty sure I have enough fingers to count the brilliant games in this season. It was very important that we showed the reaction in the second half.”

It’s not always glamorous when you grind out a win, but there’s certainly something satisfying about it. Looking logy and a touch complacent, the visitors got things started in a sharp contrast to their hosts who, coming off a spirited but ultimately unsuccessful outing against Manchester City the week before, picked up exactly where they left off with their high energy game causing the Merseysiders some serious discomfort. With the new owners in the stands, Swans boss Francesco Guidolin went in to this one knowing full well that his job is in jeopardy — though the Italian would be hard done to be sacked on that performance, considering that Mike van der Hoorn was inches away from leveling the scores deep in to injury time, only to see his off-kilter volley skew wide of the post.

“The players gave me a good answer,” said the Italian manager. “Our relationship is good. There is no problem between me and my players,” continued Guidolin. “I don’t know [about the future]. It’s not my decision,” conceded the former Udinese boss. “It’s just for me to prepare for the game and the team. I know the situation. It’s a possibility. The important thing is to prepare with patience.”

The first half may have been noting worth remembering, but the second was exactly what we needed — a perfect response after it started to look like it’d be one of those days. And, really, you can’t ask for much more than that. Although questions remain about our defense and whether or not Loris Karius, who didn’t look quite as steady as you’d hope, will actually be the one to replace Simon Mignolet in the long term, it’s worth noting that it’s still early days for the German ‘keeper in specific and this team in general. Patience is a virtue…