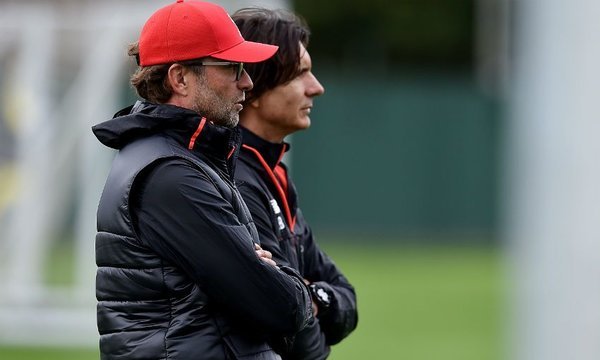 I’ve said it before and I’ll say it one more time — there’s really nothing that you can write about this fixture that hasn’t already been said at least a dozen times over. If you know football, you know about this one.

Unfortunately, it’s not always known for the best reasons, leaving both Liverpool boss Jurgen Klopp and Manchester United manager Jose Mourinho to stress that by the time the final whistle is blown, we should be talking about the football and not about the nastiness from the terraces that quite regularly goes hand in hand with it. It’s not often that these two sides agree on anything, but that’s undoubtedly common ground.

To be honest though, I’m fine with it ending at human decency — no one ever said we had to like each other and you’ll forgive me if I stop short right there. If there’s ever a fixture you want to win in the most emphatic possible way, it’s this one right here.

“We don’t think about United too much,” said Klopp, speaking to the press. “We know about their strengths and where they are individually strong, experienced and all that stuff. They are a good side, but if they are not concentrating for a second, then we can use the situation,” added the German tactician. “There’s not a big difference between the teams. Nobody can be thinking this will be a clear result with a game decided early on.”

That, of course, isn’t the impression the press is giving with both United legend Paul Scholes and Reds alumni Danny Murphy tipping the hosts to take the upper hand, but nothing is ever quite cut and dry in these encounters. Adam Lallana, who is yet to shake off the groin injury he picked up away to Swansea City, and Georginio Wijnaldum, who picked up a knock on duty with the Netherlands, will both be missing out while the visitors will be able to call on Henrikh Mkhitaryan and defender Luke Shaw after they returned to full training over the international break — though it might be a bit too soon for either to play a big part.

While Mourinho is being tipped to park the bus and try to hit on the break, the fact that Liverpool have yet to keep a clean sheet in the Premier League this season may have him considering a war of attrition with his German counter-part. Between the likes of Zlatan Ibrahimovic and Anthony Martial, they have the firepower to compete, but keeping up with the Reds high octane gegenpressing could be difficult for a team that have failed to truly click quite yet. United haven’t exactly been steadfast at the back either with only one win in their last four matches and seven goals shipped in the process, but that tide can quickly turn and there would be few places he’d rather do it than at Anfield. He’s never been a popular figure on Merseyside and now that he’s in charge of our biggest rivals, that won’t change anytime soon.

Hopefully, his record against Klopp won’t either; these two have come head to head five times in the past and the Portuguese has only come out on top once before. A two-legged affair between Borussia Dortmund and Real Madrid back in 2013 may spring to mind when you think of the history between the two of them, but it was just over a year ago that Klopp was claiming his first win in England at Mourinho’s expense as he spiraled towards the sack at Chelsea with the sweet sounds of the travelling Kop raining down from the emptying stands at Stamford Bridge — a tune that I for one would like to hear again.

Play it again, Jurgen? Indeed; once more with gusto.