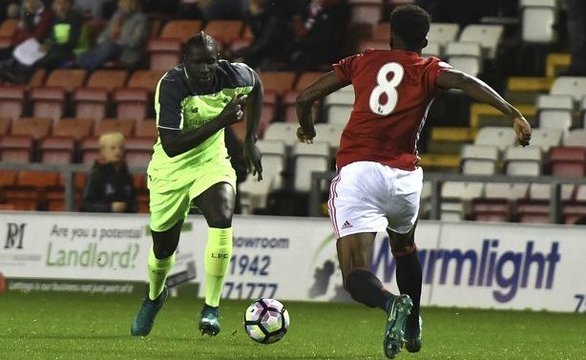 He may not have taken part when Liverpool’s bitter rivals visited Anfield on Monday night, but Reds defender Mamadou Sakho did turn out for the reserves when they met their Manchester United counter-parts at Leigh Sports Village the next day as two sides ran out an exciting 1-1 draw.

Although Liverpool boss Jurgen Klopp has extended an olive branch to the Frenchman after an apparent falling out, the highly rated defender has been training and playing with the Under-23’s in an attempt to get back to full fitness after refusing the suggestion to go out on loan for the season. While opinion remains split over whether or not he’ll ever play a first team game for the Reds again, reserves boss Michael Beale believes that physically he could be back in contention in the very near future.

“I thought Mama looked strong,” he told the Liverpool ECHO. “United were always looking for their No 9 (Scott McTominay) and his aerial threat but Mama showed his experience. He was a good guide for young Tiago Ilori alongside him who seems to be in fine form too at the moment,” added the U23s Manager. “I am pleased to have them both as part of our team. They give us a platform to play. Mama is training with us and he’s working hard every day. That’s the closest he’s looked to full fitness,” continued Beale, before hinting at a possible return to the top, “A couple more games like that and we’ll see what happens from there.”

Fit again or not, the 26-year old may have a hard time forcing his way back in to the Klopp’s plans. Out of action since April after being accused by UEFA of doping — a charge he always denied and went on to beat — Sakho picked up an Achilles problem and fell out of favour with the Reds boss during a pre-season tour of North America. After turning down the option to go out on loan, he found himself outside of the first team picture and went on a rant on social media about lies regarding his readiness to play. With the likes of Dejan Lovren and Joel Matip currently holding down the fort, whether he’s match fit or not, getting a game for the first team won’t be the formality it once was.