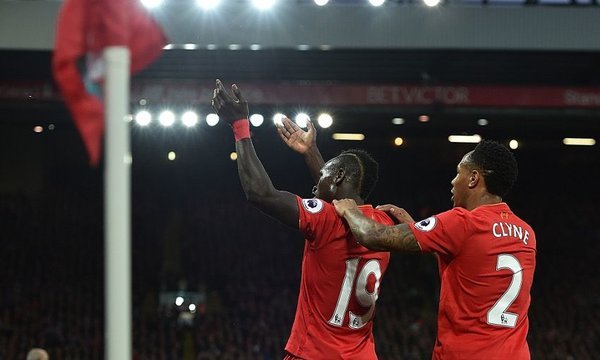 On a day when both Arsenal and Tottenham Hotspur dropped points, Liverpool moved on up with only goal difference separating them from the table topping Gunners — for now, anyways — as the Reds rolled on to a convincing, if narrow, win over West Bromwich Albion at Anfield.

To be fair, the scoreline should have been far more emphatic after stunning first half goals from Sadio Mane and Philippe Coutinho saw Jurgen Klopp’s men race to a commanding lead, but as they looked on course to keep their second clean sheet of both the season as well as the week, in typical fashion, the Baggies hit back late through a set-piece as Gareth McAuley enjoyed a bit of luck to finish past Loris Karius.

If it wasn’t for West Brom ‘keeper Ben Foster and defender Jonas Olsson, it could have been much, much more with the shot-stopper denying Dejan Lovren with an acrobatic save to keep the Croatian’s glanced header out of the back of the net and the big Swede getting down to deny Emre Can a certain goal, putting his body on the line with a courageous, last ditch tackle. Georginio Wijnaldum, back in action as a late sub for Adam Lallana, came within mere millimeters of putting the icing on the cake late on, but could only curl his shot just wide with the goal gaping.

Taking a cue from Manchester United — who eeked out a draw at Anfield earlier in the week — the Baggies came to Merseyside to defend and to frustrate, but unlike Jose Mourinho’s side, that only lasted 20-minutes as a quick counter-attack initiated by Countinho’s superb dummy saw Mane smash home Firmino’s excellent cross. It took only 15 more minutes for Liverpool’s little magician to double the score with the Brazilian cutting inside McAuley before sweeping home.

“Their front five are as good as anything in the league,” said Baggies boss Tony Pulis, in a surprisingly conciliatory mood following the final whistle. “They have got a free run at it this year. They are not in Europe, which is draining,” explained the Welshman. “Last time [that was the case] they came close with Brendan [Rodgers], he had a free run. This team has a chance.”

Considering the way we came out of the gates, it’s hard to argue with the Baggies boss, but it’s far too early in the season and there’s way too much that could go wrong to start believing our own hype — or any from a manager that isn’t known for dishing it out.

With that being said, despite a tough run of matches to start the campaign, it’s another electric outing from Klopp’s side as the German closes out what’s been an exciting first year in charge of the Anfield outfit. An inability to kill off the game and yet another spill on a what should have been a clean sheet may have took a bit of the gloss off of what was a very satisfying victory, but it’s nothing at all to complain about — nine games unbeaten and within touching distance of the summit? Who would possibly moan about that?