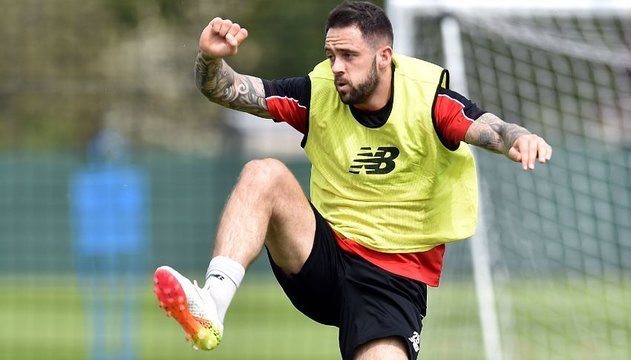 After spending last season on the sidelines and working his way back to fitness on the training pitch and with the U-23 squad, Liverpool striker Danny Ings suffered another set-back in his fight for first team football with the knee problem that he picked up in the League Cup meeting with Tottenham Hotspur last weekend requiring surgery to fix.

“To say we are gutted would be an understatement; he is such a great boy and has worked so hard that he deserves better luck than this,” said Reds boss Jurgen Klopp. “It is typical of Danny’s personality, on and off the pitch, that he picked up this injury to his knee when courageously trying to win the ball back for his team by making a tackle,” explained the German manager. “I’m told the likely lay off is anywhere from between seven to nine months. He is mentally strong, physically strong and will have the very best treatment and rehab possible to make sure when he returns he is ready to play for us at the level we know he is capable of.”

Although it was likely that he’d find his opportunities in the first team limited this season, the 24-year has been quietly working his way back in to contention with a good pre-season, some strong outings for the reserves and his few cameo appearances at the top level showing that he’s the kind of player that fits in well with Klopp’s all-action style of play. Surgery, which will take place in London later this week, will repair damage to the cartilage in his right knee — the opposite knee from the one he suffered anterior cruciate ligament damage to this time last year.

“A top person, a top pro and a top player,” wrote Reds midfielder Adam Lallana on his Instagram account. “He’s cleared every hurdle placed in front of him – this one will be no different,” added the Englishman, clearly gutted for his teammate and compatriot. “Come back stronger and better!”