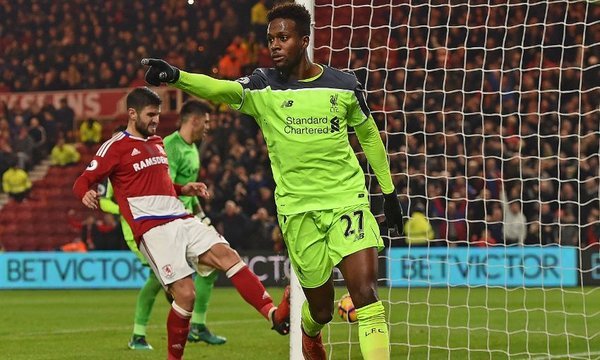 Although Philippe Coutinho’s proposed return to action in the New Years Eve clash with Manchester City could see Roberto Firmino slip back to his preferred central position, Liverpool striker Divock Origi is staking his own claim for the spot at the heart of the Reds attack after picking up his fifth goal in as many games in the 3-0 win over Middlesbrough on Wednesday night.

“I do my best,” the Belgian striker told the club’s official website. “You work in the week and at the weekend you can express [yourself]. You just have to keep on working,” enthused the 20-year old. “I have very big goals. For me, it’s only the beginning – I have to keep on making steps,” added Origi, sounding keen to keep his place in the starting eleven. “At the end of the season, then you have time to reflect.”

It was an instinctive strike from the youngster — a right place, right time finish that you see from the best in the business. A beautiful, flowing move cut through the ‘Boro defence and culminated in Origi getting on the right end of a square ball from Adam Lallana to finish cooly past a helpless Victor Valdes. Not only putting a disappointing run of games to an end, but capitalizing on Arsenal’s slip up against Everton earlier in the week, Liverpool go into the meeting with their crosstown rivals next week very much back in business.

“It is a huge, huge game,” explained Origi, looking ahead to the trip to Goodison Park. “Now we have to recover from this game, take the good things from this game and improve the less good things and have good training,” continued the Reds attacker, hoping to keep up the pressure on league leaders Chelsea. “We will go there with very, very big motivation.”