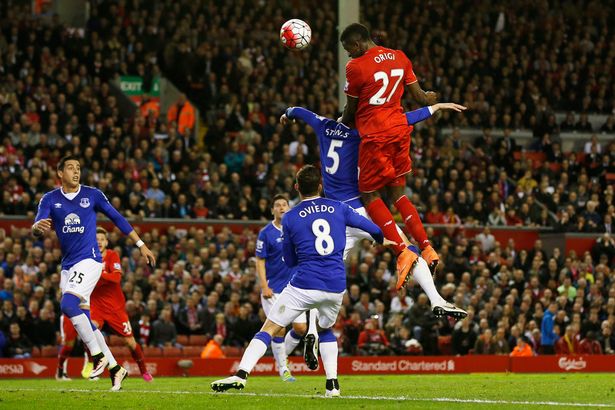 I was supremely confident a couple of weeks ago, Everton were giving away goals and Liverpool didn’t look like walking away from any fixture without chalking up some points.

Since then, Liverpool have stumbled against Bournemouth and West Ham and Everton have beaten Arsenal 2-1. Luckily, Liverpool have recently returned to winning ways against Middlesbrough – smashing the Boro 3-0.

No, I did mean 0. We got a clean sheet! Hallelujah!

We can’t read too much into the Blues’ recent 2-1 victory; they hadn’t won a game before that since September.

SEPTEMBER. THE SEASON BEGINS IN AUGUST. ARE YOU SERIOUS?!

A loss for Ronald Koeman – a man who loves a red Christmas tree – will cement Everton into their ninth place to the festive season; being behind West Brom on goal difference. A victory would see them leapfrog Southampton into seventh.

However, a win for the Mighty Reds is a very tasty idea. Although Chelsea are looking very tidy, three points would see Liverpool jump ahead of Manchester City, into second, six points behind Antonio Conte’s men.

Challenging Chelsea, City and – I guess – Arsenal seems to be Liverpool’s target this season and we’re in a good a position as any of the teams currently sandwiching us – City and Arsenal – to snatch it away from Chelsea.

Two things. A) How nice would it be to snatch the title away from Chelsea? B) For what it’s worth, I don’t think Chelsea are untouchable; they’re winning their fixtures by a single goal at times. If Diego Costa injures himself quite badly (God forbid) it’s hard to see who might save them at times.

You may think ‘Oh, he hasn’t mentioned the derby as much as I thought he would, he’s just went on about the apparent title race,’ and you’re right – I am a firm believer that this fixture means A LOT more to our Blue brothers than it does us.

That being said, when we beat them, I will paint myself red and run – screaming – around Goodison Park.

Dejan Lovren was available for Liverpool last week, even after appearing to pick up a knock against West Ham. Oddly, he didn’t play alongside Joel Matip – who, as far as I know, isn’t injured. There have been reports about Matip suffering with an ankle injury however, so, maybe it’s that.

Marko Grujic is still nursing a tendon issue and Philippe Coutinho’s recovery from ankle ligament damage has been progressing well, with him hoping to return for the New Year’s Eve hosting of Manchester City.

Everton will be without captain Phil Jagielka; he was sent off while they were holding onto their slender lead against Arsenal, pulling back Lucas Perez.

Koeman will be without new man Yannick Bolasie, the Congolese winger is currently recovering from a knee injury and has recently been told he faces a year on the sidelines and numerous surgeries before he’ll play again.

Mo Besic is also suffering from an injury, meaning Everton will likely start James McCarthy in a two-man pivot with Gareth Barry.

After typing out those three names, I feel like I should be given a yellow card. Speaking of which – those who like a bet, I think it’s quite likely there will be at least three bookings. I’d also have money on Adam Lallana playing a part in any goal Liverpool may score.

You see what I mean about not reading into the recent win too much? It’s about as relevant as us losing to Bournemouth a fortnight ago.

It’s difficult going to Goodison Park, I’m not going to pretend like it isn’t. Many teams struggle to take three points away from Everton and we are no different.

Our last win at Goodison Park was in 2011 but our most recent loss against Everton was in 2010; we fell victim to the duo of Mikel Arteta and Tim Cahill.

However, I am more optimistic this time around… I’ve said it a few times now over the last few weeks but I do think Liverpool will outperform their latest opposition.

It won’t be pretty, it won’t be anything like the 4-0 at Anfield earlier this year – or the 4-0 two years ago – but I’m certain Liverpool will be the better of the two sides.

Over-confidence is something I don’t have going into Monday night; Liverpool have been the better team on several occasions and have failed to walk away with three points. Whether we fail to capitalise on our chances or let in a cheap goal, we seem to stumble far too often against weaker opposition.

Everton will bring their A-game – this is their biggest game of the season – I’m not saying that as a joke, it actually is the game the fans most look forward to – and they will give Liverpool a mountain to climb.

I don’t expect Everton to hold back; their talisman Romelu Lukaku is the best striker in the league not playing for one of the big boys and will be hungry to score against a huge rival.

They’re going to be a threat, essentially. Everton are going to give us a hard time but I think Liverpool will record their first win at Goodison in five years.

Liverpool will dictate much of the game and have the lion’s share of possession and, in my opinion, will take the game by the scruff of its neck and run out winners. Everton 1-3 Liverpool.

If you’d like to strongly disagree with me or remind me of what I’ve written, after Besic scores a brace and Mane is shown a straight red in a 4-0 win for Everton, you can find me on Twitter – @StefanoHairon