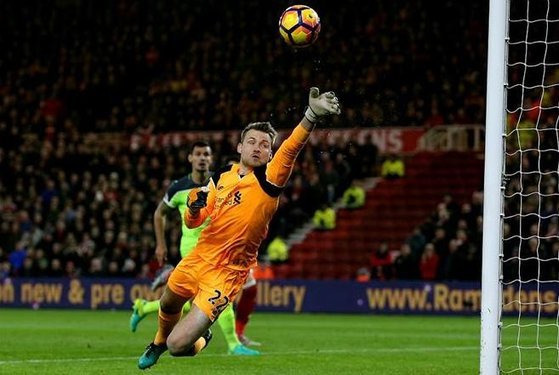 Speaking to the press ahead of the Merseyside Derby on Monday, Liverpool boss Jurgen Klopp has confirmed that Reds ‘keeper Simon Mignolet will keep his spot in the starting eleven when they square up with Everton after recalling the Belgian to the side in place of the embattled Loris Karius.

“I don’t want to change each week – that was not the plan. Simon had a really good game [against Middlesbrough] so he will be in goal, for sure,” confirmed the German manager. “I tried to explain it after the game: it was about not pushing Loris [Karius] through the situation. Now he can use the time in training and have no pressure, only the pressure he makes himself with getting better,” continued Klopp. “I know about how fantastic he is as a goalkeeper but of course it’s not enough if only I know it. That’s all. Simon did really well, so [there is] nothing to think about, only if something happens and then we have Loris again.”

Relatively untroubled throughout the 90-minutes, Mignolet had a rather quiet return to action as Liverpool ran out 3-0 winners at the Riverside Stadium. At the final whistle an Adam Lallana brace and a fine strike from Divock Origi was more than enough to see off Boro’s challenge as the Reds got back to winning ways, but with the score finely balanced at 1-0, things could have been much different had the Belgian ‘keeper not stopped Viktor Fischer’s stinging shot at the near post.

“In football, things can change very quickly with an injury or an illness,” said the former Sunderland shot-stopper. “Therefore you have to look after yourself, stay professional, keep your head down, work hard on and off the pitch and stay focused, which is not always easy, especially as a ‘keeper,” mused Mignolet. “I always try to be ready in this kind of period.”