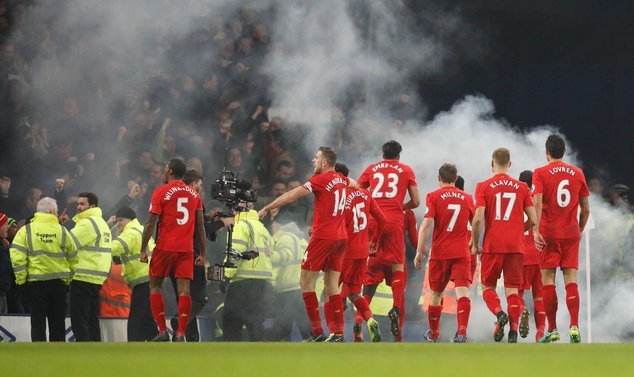 An emotional evening for Jurgen Klopp and Liverpool fans, seeing Everton dominate the first half-hour and Ross Barkley still on the pitch after deserving two red cards made for hard-to-watch football.

Ultimately the Reds dominated most of the game, with Ronald Koeman’s team only able to register one shot on target in the 90 minutes. Klopp’s men had the lion’s share of the ball; boasting almost 70% of the possession and, amusingly, Roberto Firmino had nine touches in Everton’s penalty area – the same number the entire home side had in the 18-yard box at the other end.

The defensive duo of Ragnar Klavan and Dejan Lovren were seamless at the back on Monday night. After a nervy start to the game, Liverpool’s defence straightened themselves out a few lame headers were all Everton had to threaten Simon Mignolet.

Gini Wijnaldum was instrumental for Liverpool – he grew and grew and grew some more as the game went on, ending up almost shepherding the team into Everton’s box for the winning goal. Sadio Mane was the first to pounce on the rebound of Daniel Strurridge’s scuppered shot, much to the disappointment of Joel Robles, the Everton fans and Ashley Williams – the latter of which was in the wrong position to deal with Liverpool’s three-pronged attack and should do better.

By half time Everton had lost the services of James McCarthy, who had injured himself earlier in the game but played through until Gareth Barry was called into action. Not long after the second half went underway, Maarten Stekelenburg was forced off through his own troubles, after colliding with Leighton Baines, and made way for Robles.

Blues’ fans will feel as if they were robbed in this fixture but that is just not the case; Barkley should have seen a straight red for his horrific challenge on Jordan Henderson. The ball went just out of reach of the Scouser and he lunged in on the Liverpool captain’s shin, which could have easily broken his leg.

“It was a really harsh, harsh challenge,” Klopp said in his post-match interview. “I saw it one time, but everything is clear. If you saw it, say how it was. I think the referee had a difficult game, but maybe Ross was really lucky and Hendo was really lucky.”

After the fact of the tackle, which could have put Henderson on a stretcher, Mike Dean was given another chance to dismiss Barkley. The previous challenge on Henderson saw the young midfielder see yellow and, after kicking away the ball as Henderson went to take a free kick, he could – should – have received his marching orders.

The game could have been won earlier, if it wasn’t for a wonderful save by Robles – not too long after coming on for the injured Stekelengburg, the Spaniard reacted quickly to an exquisite Roberto Firmino volley from ten yards out.

Liverpool, simply, need to make it a habit to win games like the latest victory at Goodison Park; the extra two points on Monday night could be the difference at the end of the season, European qualification has been decided on less.

It’s now two games on the bounce Liverpool have walked away with satisfactory results, after securing six points against Middlesbrough and Everton – totting up four goals – I’m hoping we can end the year on a high with our two final home games against Stoke and Manchester City AND start the New Year in style away at Sunderland.

Klopp’s Red men are likely to still be considered outsiders in the chase for the Premier League title this season as Chelsea will celebrate Christmas being six points clear at the top of the table, however Liverpool are building something special this season – I can say with confidence that Liverpool will (probably) be back in the Champions League next season, I just hope we can also add some silverware to our trophy cabinet along the way.

Liverpool’s next game is against Stoke at Anfield and, based on current form, I’d be disappointing if we didn’t get all three points and keep the pressure on our rivals – especially as we have City next week.