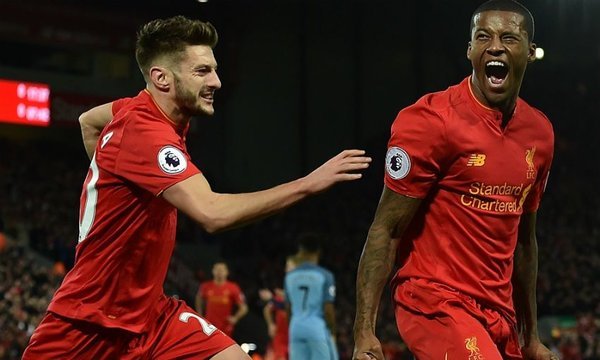 Bending but never breaking, Liverpool kept the pressure on Premier League pacesetters Chelsea, cemented their grip on second place and widened the gap on their closest chasers in Manchester City with a comprehensive victory over Pep Guardiola’s side.

In a match littered with misplaced passes and basic errors, a bullet header from Reds midfielder Georginio Wijnaldum proved to be the difference with the Dutchman rising highest to meet Adam Lallana’s pitch perfect cross before the ten minute mark. For all the attacking talent on display, it was a decidedly defensive outing for both sides as they either cancelled each other out or self destructed their own chances as they tried to keep up a frantic pace.

To be blunt, it was a weird one. The visitors, for their part, couldn’t come close to hitting top gear despite being invited throughout the second half by their clearly tiring hosts to really make a game out of it. Liverpool, in a very odd role reversal, were always one pass away from getting their act together going forward, but defended brilliantly as a unit with James Milner keeping Raheem Sterling quiet and the duo of Ragnar Klavan and Dejan Lovren marshaling Sergio Aguero to such a degree that the Argentinian wasn’t even a factor.

Heap on the fact that we didn’t need to score four goals to win and kept a clean sheet against the Citizens and things go from weird to downright strange — not that I’m complaining one bit.

“Actually, I don’t know if I need anything plus to be really happy when we win against Man City – actually, I know I don’t need anything else, so it’s all good and hard work,” said Liverpool boss Jurgen Klopp when asked if Chelsea’s win earlier in the day made this victory more satisfying. “It is completely not important what happens in this moment apart from that we win games – that’s the only thing we are really interested in and it’s so difficult in this league, unbelievably difficult,” explained the German manager, already thinking ahead to the trip to Sunderland on Sunday. “[Tonight] we got the three points and I really though we deserved it, and that’s the only thing that’s really important.”

In what’s becoming a habit, the Reds have now won their last four meetings with the Citizens in the Premier League, but in what was a must win match for both sides, this will rank right up there as the most satisfying. Scrappy and downright ugly at times, it wasn’t the vintage attacking football that we’re known for — it was something else entirely, but it was wholly effective.

Speaking to the press following the final whistle, Milner said that they put in “one of our worst performances of the season”, and in terms of how Liverpool are set up to play, he’s absolutely right. With that being said, the fact that they were able to work it out and pull off a win against a team the caliber of Manchester City shows that they’re not only on the right track, but they’re screaming full steam ahead on it. Can you think of a better way to end the year? I can’t.