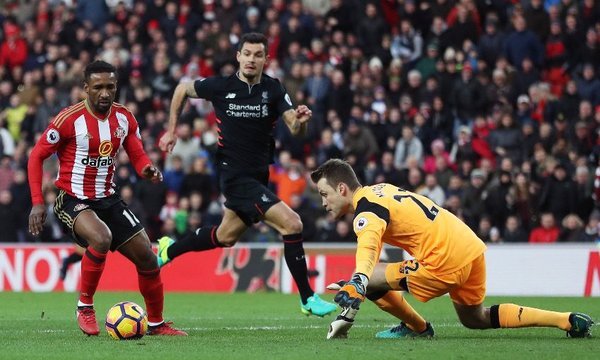 On any other day it’d be just one of those days, but after stealing a march on Manchester City at Anfield on New Years Eve, Liverpool threw it all away at the Stadium of Light with a disappointing draw with relegation bound Sunderland to queue up a social media meltdown of epic proportions.

There was no surprise when the visitors poked out in front through Daniel Sturridge less than ten minutes into proceedings and there was even an audible lack of bother when their hosts drew level from the spot through Jermaine Defoe to send us into the break on level terms, but as the match wore on so did the nerves as Black Cats ‘keeper Vito Mannone put in a Man of the Match performance to keep the Reds at bay — not the first time the Italian has come up large against us.

There’s only so many times you can knock on the door without receiving a response and Sadio Mane had looked to have kicked it in with a late winner, turning in Alberto Moreno’s corner at the back post, but a free-kick that never should have been awarded after Defoe went down under minimal contact from a combination of challenges from Lucas and Emre Can handed Sebastian Larsson the kind of dead-ball opportunity we’ve seen the Swede fire home throughout the years.

He wouldn’t find the back of the net, of course, but he would find Mane’s outstretched arm for as stonewall a penalty as you’re likely to see this year. Liverpool shot-stopper Simon Mignolet, who was outstanding throughout and came within a fingertip of stopping the England striker the first time around, wouldn’t fare quite as well with his second bite at the cherry as Defoe sent him the wrong way to seal a valuable point and give Mackem’s boss David Moyes a rare chance to act all smarmy.

“Maybe if I was a German manager, you might praise that, actually,” said the former Manchester United boss, reflecting on comments made by his counterpart in Jurgen Klopp about their overly defensive performance at Anfield in November. “If I had been German, you might have been saying, ‘Great, you’re doing something different,'” said the snarky Scotsman before praising Sunderland’s resilience. “I thought we did well, stuck at it, stuck up against Liverpool as much as we could and tried to make it hard for them, and played well as well.”

And, to be fair, he has a point — they did try to make it hard for us, but with only Mannone and Defoe looking worth their salt, they were rarely successful, but still came away with something to show for their troubles. Full disclosure: they should have had another penalty when Can appeared to have handled midway through the second with the scores still tied, but you see those given and you see them waved away. If the Chosen One wanted to get all uppity about that, he could justifiably turn on the water works, but who cares, really?

Now, you could say that the quick turn around from the meeting with City is to blame, but had Liverpool even looked remotely bothered by that, I’d have a far easier narrative to write. Instead, I have to chalk this up to one of those one off’s that you run in to throughout the course of the season. And, when you think about it, only the Reds could take full points from Chelsea, Arsenal, Everton and Manchester City and in turn drop them to Burnley, Bournemouth and Sunderland because, you know, that’s apparently what’s up.