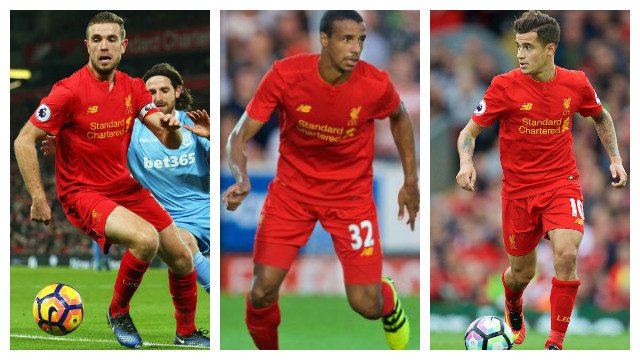 Although Liverpool talisman Philippe Coutinho made a cameo appearance in the narrow loss to Southampton earlier in the week, Reds boss Jurgen Klopp has confirmed that the Brazilian won’t be rushed back in to the starting eleven when they square up to Manchester United on Sunday — and though they’re back in training, the same goes for club captain Jordan Henderson and defender Joel Matip.

“They all were in training yesterday, so [we have] to wait on how they reacted to the training yesterday then we have to make decisions,” said the German manager, speaking to the press at Melwood earlier in the day. “The last game was only two days ago and so we have to wait for the reaction of those players too and then we make a line-up,” added Klopp, not giving anything away. “But of course they are much closer than they were before any other game in the last few weeks so that’s good.”

Winning nine matches on the bounce, Jose Mourinho’s side look to have put their early season struggles behind them and going in to the weekend sit only five points off of second placed Liverpool. With a number of key figures injured, the Reds have started to slip as of late with back to back scoreless outings in the domestic cups taking a bit of the shine off their star power. With that being said, there’s no better time than the Northwest Derby to find a bit of form and if the likes of Henderson, Matip and especially Coutinho can play some part at Old Trafford, they’ve got a much better chance of doing just that.

“Quality. When Phil is not playing, of course you miss his creativity and finishing and all that stuff. He’s a very important player for us, it’s the same as Hendo in a different role,” enthused Klopp when asked about the midfield duo. “When they are not available then I actually don’t think too much about them because you have to find other solutions. That’s what we did pretty good in the past few weeks, especially when we had to play without Phil,” explained the Reds boss. “Of course it needed a little time adapt to the new situation because he has a specific kind of play in how he interprets his role as an offensive midfielder, defending most of the time on the left side,” continued the charismatic German. “That’s how it is. But, [it’s] good that they are back, if they are back.”