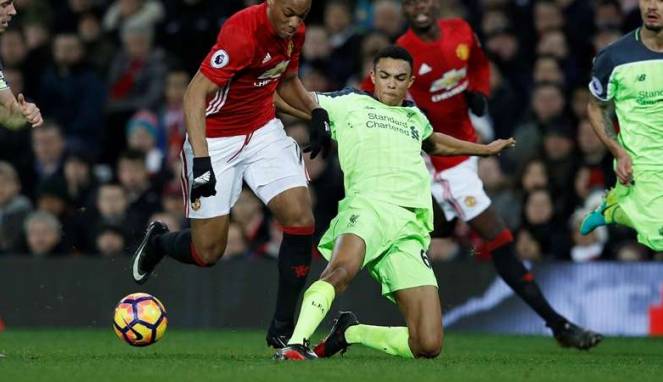 In a massive frying pan to fire situation, a last minute call on the fitness of Liverpool fullback Nathaniel Clyne meant that Reds boss Jurgen Klopp was forced to hand youngster Trent Alexander-Arnold is first Premier League start as the Anfield outfit ran out a 1-1 draw with bitter rivals Manchester United on Sunday — a situation that the 18-year old handled with the skill of a far more experienced player.

“Really big compliments to Trent,” said veteran centreback Ragnar Klavan, speaking to the club’s official website. “To step in at such short notice a couple of hours before the game and then perform like he did at Old Trafford, that shows he has a lot of quality and he’s a good player.”

After playing every minute of every league match this season, Clyne looked certain to run out against Jose Mourinho’s side only to have a rib injury that he picked up against Southampton midweek take a turn for the worse. Rather than switch James Milner over to the right flank and deploy Alberto Moreno on the left, Klopp put his faith in Alexander-Arnold and he showed everyone why he’s one to keep your eye on.

“Nice, eh?” said the Reds manager when asked about the youngster. “It was clear in the beginning. Then you see Anthony Martial, one of the quickest players in the Premier League, in the first two situations it was difficult and he needed a little bit of time to adapt. But then he did brilliantly,” enthused Klopp, trademark grin on display. “The decision was not that easy. The first impulse if Clyney can’t play is Millie on the right and Alberto (Moreno) left – but I didn’t want to change two positions because of one injury,” added the German. “We didn’t have to be too brave to bring him, we thought he was ready for it and he proved it.”