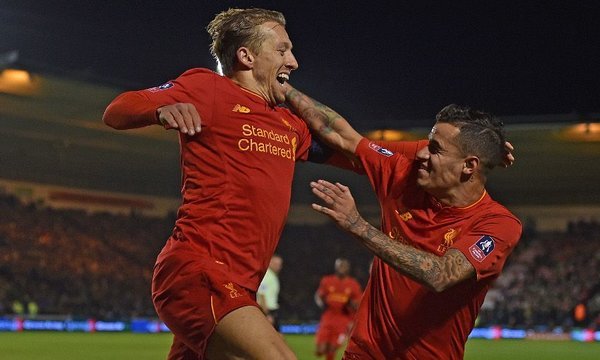 In a match that proved that there actually is a first time for everything, Liverpool utility man Lucas scored the only goal as the Reds navigated their way past a resilient Plymouth Argyle side dead-set on bringing this replay to extra time.

And, to be fair, they came close to doing just that with Pilgrims striker Jake Jervis missing the opportunity to restore parity, seeing his spectacular overhead kick thump agonizingly off the post with visiting ‘keeper Loris Karius well beaten as the League Two side tried to force the issue. In what was a eerily similar echoing of their frustrating first meeting with Derek Adams’ side, the visitors failed to turn chances in to goals — a point exemplified by Divock Origi’s poor penalty being comfortably saved by home shot-stopper Luke McCormick.

Seemingly learning his lesson from their first time out, Liverpool boss Jurgen Klopp named a bit of a stronger starting eleven at Home Park with both Philippe Coutinho, who has only just returned from an ankle injury suffered in November, and an out of sorts Daniel Sturridge, who continues to underwhelm, getting the nod from the German manager. As expected, the Reds boss the possession throughout, but for all the attacking talent on display, it was a player who hadn’t scored in seven years that ended up finding the back of the net.

Welsh youngster Ben Woodburn was only ten years old the last time Lucas scored — think about that one for a minute. The Brazilian, who played stand-in skipper for the night, found himself in space just before the 20th-minute to head home a Coutinho corner. Lucas, partnering Joe Gomez in defense, scored with his head. Did you ever think you’d read that sentence?

Let it sink in for a minute.

That we needed to rely on a header from a defender might seem a touch ludicrous considering that we were playing a side a whole 66-places below us in the English football pyramid, but the Pilgrims proved during the meeting at Anfield that they’re no pushovers and they made certain we knew that wasn’t a fluke when we went toe-to-toe again at Home Park. Oscar Threlkeld caused problems for Alberto Moreno down the left flank and Paul Garita came within inches of writing his name in the history books only for a well timed challenge from Trent Alexander Arnold to deny the Cameroonian his moment of glory.

“Their performance was good in both legs, especially when you are a top team in League Two and have to play obviously completely differently,” said Klopp when asked about Plymouth. “I thought today, there were 10 or 15 minutes where they became really stronger than what they are obviously capable of. We did that well that they really had to defend all the time,” conceded the Reds boss. “This is not the most exciting football but you have to stay patient to do it. They did really well.”

And, to be honest, the boys in Red did alright too — enough to get through to the next round anyways. What more could you want? With their League Cup semi-final second leg sandwiched between meetings with Swansea City and Premier League table toppers Chelsea, this was the right squad getting the right result. Easy as that. Well…not easy, but you know what I mean.