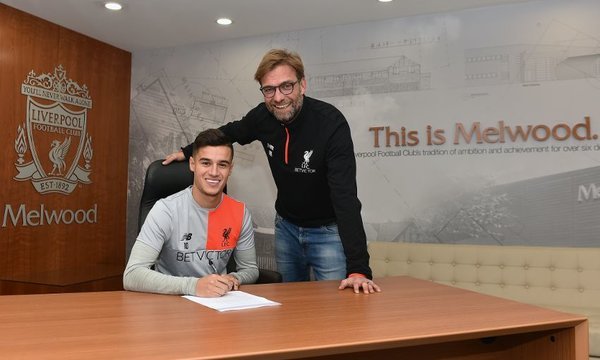 It wasn’t that long ago that Liverpool attacker Philippe Coutinho was putting pen to paper on a new contract, but in order to ward off interest in the mercurial Brazilian and tie his long term future to the Anfield outfit, the Reds hierarchy just re-upped his deal with a new five-year contract worth a reported £150,000 per week that does away with his buy-out clause. While that kinda of cash is certainly an incentive to sign on the dotted line, it’s obviously not the only reason he’s decided to stick around.

“Ever since my arrival here, I was welcomed with open arms by the supporters – and everyone at this football club,” enthused Coutinho, speaking to the club’s official website. “This is an important factor that carries weight when you decide to remain here for a longer period – and this did have a lot of weight when I thought about the renewal of my contract,” added the 24-year old. “I can only thank every supporter for their faith in me. I really hope to repay them. I will do my very best on the pitch to create assists for my teammates and score goals for us to try and win trophies and titles.”

Inconsistency may have plagued the Brazilian during his first years in England, but under Liverpool boss Jurgen Klopp, he’s blossomed in to a full blown superstar and the linchpin of a Reds attack that leads the Premier League in goals scored. Interest from the likes of Spanish giants Barcelona and nouveau riche French outfit Paris Saint-Germain F.C had the media abuzz with talks of a big money bid for his services, but all the while Coutinho remained committed to the cause — and he’s now backed up his words with action.

“I knew of Phil before I came to Liverpool and I was well aware of what a talent he was, but since arriving here I have not only witnessed his ability up close, but also his ever-continuing development. He is truly world-class – in that very top bracket,” explained Klopp without even a sniff of hyperbole. “The fact he wants to stay here and be part of what we are looking to build and develop shows his personal commitment is to make himself better and be an integral part of something that is very special.”