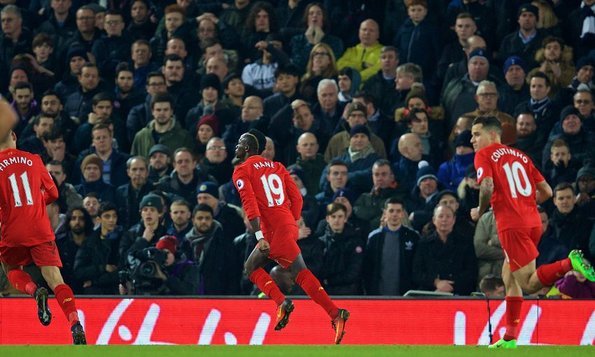 That was better, wasn’t it?

Only if we could stop stumbling over the smaller clubs…

On a more serious note, Spurs were in damn good form coming into this game; if we ignore the injuries they’ve had, they probably were better suited to get a win at Anfield than they have been for years.

It’s testament to our strength of playing against attacking teams that we were able to press Spurs the way we did on Saturday night, forcing errors and panicking their players.

Reminiscent of classic Liverpool – whatever that is – we started the game with more speed than Sadio Mane and before anybody had time to get comfortable on their seats, our Senegalese star was wheeling away in celebration of scoring the opener.

Sky Sports were probably hoping Paul Pogba would pull something similar off so they could create a new channel to replay it on repeat with Martin Tyler supplying constant commentary.

Actually, that’d be a great thing as it’d mean Martin wouldn’t have enough time to commentate on games!

Liverpool continued as they began and pretty much had the upper hand for all of the game with Sadio Mane looking like a constant threat, the AFCON star sealing a brace in the first half too.

Jurgen Klopp said, after the game, that life is difficult when you don’t know how you’re going to perform.

Sunday will be perfect. The performance was fantastic, the intensity unbelievable, both teams, but our side maybe more. We caused them problems. The first half we started off really good and our transition game was fantastic. In the second half we improved a lot defensively.

All over it was a good performance and a deserved win. With a performance like tonight we are a really strong side. That is what we have to try and bring on the pitch every week.

Never mind Sunday, Jurgen. There are about 15,000 people hitting #town tonight after The Reds got their first Premier League win of 2017.

After the full time whistle, Mauricio Pochettino more-or-less said the Premier League title race is over.

If Chelsea go 12 points clear it is a big problem, but not only for us. It is difficult to fight for the Premier League if you show that performance, that lack of desire to play for a win. It will be difficult for anyone to catch Chelsea, it is a massive gap. More difficult than before.

I’m not so sure I agree with everything Pochettino has said. Although, granted Chelsea get three points on Sunday, The Blues will be 12 points clear that doesn’t mean they’re untouchable.

I’m not going to suggest Liverpool, Arsenal, Spurs or even City are going to mount a late charge for the title and snatch it late on but it’s not impossible – last season’s winners confirm that.

Let’s take Liverpool for example; nobody expected us to become an absolute myth in January – but we did. It’s not too obscene to suggest Chelsea could go on a similar run.

One loss can turn into two and then being just six points clear can be very pressurising.

Saying that, I’ve labelled Chelsea as ‘champions-elect’ for about three weeks now and, to be honest, it’s a bit daft to say anybody but them are going to win the title. Things can change but we’ll have to see how the rest of this month plays out first.

Apologies for the rambling nature of this reaction piece but there were two things I felt needed to be discussed, after BT Sport’s Jake Humphrey congratulated Chelsea on winning the Premier League after Spurs lost at Anfield.

It may have been a joke but it was cringe-worthy and sparked a reaction from me as I don’t really find Jake all that funny.

Let’s just focus on fighting for a place in the Champions League next season and go from there.

Up the mighty Reds.

Feel free to continue the discussion with me on Twitter – @StefanoHairon