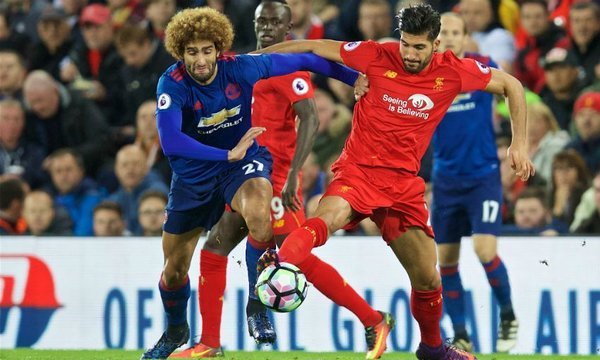 As talks between Liverpool and Emre Can over a new contact continue stutter and stall, the 23-year old reminded everyone just how good he can be, putting in an imperious performance as the Reds ran out an electric 1-1 draw with Manchester City.

“Good. Again good,” said Liverpool boss Jurgen Klopp when asked about the midfielder in his post-match presser. “We said it already he had this calf problem. Not a lot of players would have played. We had intense talks about whether we can leave him out. There were one or two games were we could do it, but now we can’t,” mused the German manager, making reference to the ongoing woes of club captain Jordan Henderson. “He was very aggressive, very clear in all challenges. He got one or two fouls, but much more on him,” continued Klopp before taking a moment to talk about Can’s future. “The story around Emre is a public story. We don’t feel it like this. We are convinced, he is convinced, I am convinced. It will happen, or not, but it’s a normal thing too. In this moment it’s all good.”

For all the assurances, the message remains mixed — Klopp has never been a manager to grovel for a player and it sounds like he’s not about to start. While the public stance from all sides is that a new contract and a extended stay at Anfield is exactly what everyone wants, there’s a hitch somewhere and no one is ready to blink quite yet.

“I read in newspapers it was about money but it isn’t about money. We’ve had a few good meetings and everything is fine,” explained Can, pooh-poohing suggestions that the impasse is purely financial. “It is about the future, what happens. The last few months the most important thing has been that I am pain-free and we have spoken more about that than the contract,” added Can, quick to point out that’s he’s happy at Anfield, but stopping short of making any promises. “We will speak in the next few weeks and months and see what happens. I want to play injury-free. The meetings are with my agent but I am very happy at Liverpool. In the future I can play for many years at Liverpool.”