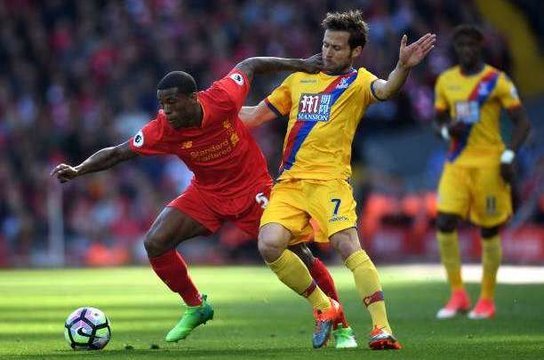 As if losing to a team managed by Sam Allardyce wasn’t bad enough, Liverpool’s hopes of qualifying for the Champions League next season are now in serious doubt as Crystal Palace not only secured their third win on the hop at Anfield, but threw the race for a spot in the top four wide open.

“(As long as) There’s a chance to qualify for the Champions League, we have to believe in it,” said Liverpool midfielder Georginio Wijnaldum, keen to move on as quickly as possible from the loss to the Eagles. “If you don’t believe you can reach it, it’s already done. We must have the confidence and stick together, helping each other out in moments like this,” the Dutchman told the club’s official website. “We will fight for the Champions League spot. That’s the only thing we can do now. We can’t change this game any more, so we have to look forward.”

Having played two matches less than Liverpool, Manchester United beat Burnley FC at the weekend to cut the gap to fourth place Manchester City — who they face on Thursday — to a mere point and maneuver themselves to within three-points of the Reds. Even further back in the table, Arsenal, who knocked City out of the FA Cup on the weekend, are seven points off the top four, but have two matches in hand — something that will make the race that much more interesting.

“I think Liverpool are in a big fight now,” said Liverpool legend Jamie Carragher. “Manchester United, [Manchester] City, Arsenal are all in there. Before today, I fancied it would be Man City and Liverpool to make those spots their own, especially with the fixtures,” explained the former defender turned pundit. “But that will give Manchester United a massive lift, especially with their result [a 2-0 win against Burnley]. Arsenal are in the [FA Cup] semi-final. Liverpool’s result will give United and Arsenal massive belief that they can make the top four.”