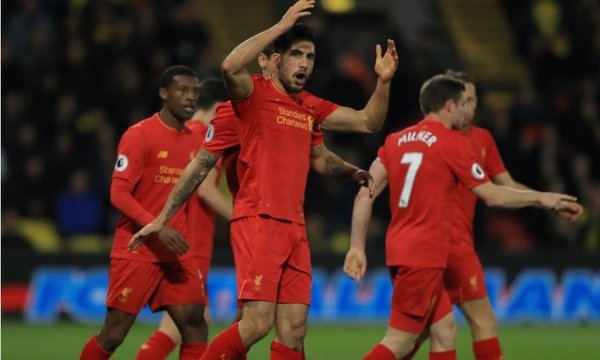 After unexpectedly coming up short against Crystal Palace last Sunday, Liverpool shook off the blah’s to take full advantage of some favourable results at the weekend by downing Watford FC at Vicarage Road to ensure that their hopes of finishing in the top-four rests solely in their hands.

The race for a spot in next season’s Champions League is at tight as it’s ever been and the Reds looked to have hit a major hurdle against the Eagles last time out only to end up coming through the whole ordeal relatively unscathed. With the Manchester clubs failing capitalize and both Arsenal and Everton blowing their own chances to close the gap, Emre Can’s spectacular overhead kick not only saw Jurgen Klopp’s side get out of Hertfordshire with all three-points, it also moved them one giant step closer to securing a spot in Europe’s most prestigious club competition.

With that being said, it wasn’t a match you’d want to relive. A dead leg meant Philippe Coutinho made an early exit — something that will be an immediate concern once the post-match serotonin stops flowing — and a certain piece of brilliance aside, it didn’t get a whole lot better from there. Adam Lallan, who was drafted in for the Brazilian, almost made a perfect return to action when he smacked one off the crossbar, but it looked like we’d be headed in to half-time scoreless until Can’s met Lucas’s lofted pass with a Goal of the Season worthy finish to break the deadlock.

The Hornets never looked like getting a touch in the early stages of the second half and yet never looked completely out of it; lacking a serious cutting edge and that little bit of luck, Liverpool failed to wrap this one up as chances for both Daniel Sturridge and another for Lallana went begging. As we waited patiently for the other shoe to drop, Reds ‘keeper Simon Mignolet turned Etienne Capoue’s fierce drive over the bar and saved from a rather soft Daryl Janmaat effort, and just when you thought you’d hear that all too familiar “thud”, it was just Sebastian Prodl smacking one off the cross-bar after the kind of set-piece scramble that ussually ends with the ball in the back of the net.

“We started patiently, played football and tried to create moments. The goal was spectacular of course,” enthused Liverpool boss Jurgen Klopp, happy to flash a smile following the final whistle. “It was clear we have to work and that is what we did. It won’t be easy for anyone to win here. We needed a bit of luck but we worked hard for it. They did not have a lot of situations but it was difficult to defend,” explained the German. “We needed to be careful and I think the boys did well. I’m fine with the performance.”

When you’re in the race for Champions League football, you’ll take those points no matter how you get them — there’s a reason they call this the business end of the season and those three-points means we’re completely back in business. Not that that makes me any less weary; look to our closest chasers and you can say they have a more difficult run in to the end of the season, but that’s all a matter of opinion.

If top spot was based on matches against teams in the top-six, the title would be heading to Merseyside, but life doesn’t work like that. While Manchester United and Arsenal might moan about facing each other and then Tottenham Hotspur and Everton respectively, I’d take those three matches and scrap with City just for the fun of it. Instead, we’ve got Southampton and Middlesbrough flanking a potentially tricky showdown with West Ham United at the London Stadium — it doesn’t sound like a minefield, but things could still very well go boom before it’s all said and done.