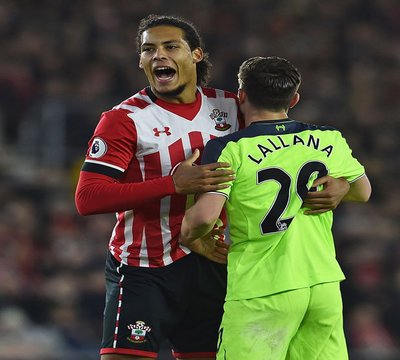 After last Sundays defeat at home to Crystal Palace, Liverpool were lucky not to find themselves as low as 5th place if results had gone against us on the weekend ahead of our visit to Vicarage Road on Monday Night Football. With the teams battling it out for the top 4 on Sunday, the Reds will be going into the game against Watford knowing that anything less than a win will be a huge hindrance on our claim for next seasons Champions League. With only four games remaining, Jürgen Klopp will have the task of motivating the squad to keep fighting until the very end. Klopp spoke out following the 2-1 loss to Palace saying;

“I know there are a lot of people around thinking, ‘Oh my God, Champions League slips through our fingers again’, but only if we let it slip.”

Though it felt like we had blown the opportunity for Champions League qualification, I do remain positive that we can secure a top 4 finish, especially with both Manchester clubs being held to draws against two of the bottom 3 teams in league & with Arsenal losing the North London derby at White Hart Lane on Sunday afternoon.

It is confirmed by Klopp that, Adam Lallana and Daniel Sturridge will both be in contention for our Monday night clash against The Hornets.

“Adam is back in team training today for the first time, which is very, very good news”

“Hendo is not on the pitch so far and there’s nothing new to say about. Daniel is in team training again today too, and that’s good.”

Though Jordan Henderson is still absent, the return of Lallana and Sturridge will be key in determining if we can achieve a top 4 finish. Adam Lallana when available, has been sensational this campaign, and had it not been for his recent injury crisis, could have us more points on the table. You may laugh at me suggesting that Sturridge is key, but he really is. Despite his regular niggles, he has shown in the past few games that he can make a difference, as we seen against Stoke City.

What should Klopp do in the upcoming summer transfer window?

The importance of the Champions League qualification is crucial and is the pivotal aspect of achieving a successful transfer window. Getting the players in that we have wanted in the past is justification of this. There are two scenarios that Klopp could find himself in this summer. One is, having the influence of Champions League football to bring in players that we, in the past, have failed to do. Two is, continuing the traditions of the past 5 years of bringing in players who are not at that top level, with the odd exception.

It has been quite split between some people if Sturridge should be sold by the club, or, if he should stay. There is no question that his ability is that of a top striker, however, after only playing in 5 games this campaign, which is saddening to say, but needs to be taken off the books.

Who would want him?

For being injured so often, who would really want to bring in a player that will only give you, at most, a quarter of a season. Slaven Bilic has been an admirer of the Englishman, and could be considering a potential move;

“If you talk about Sturridge as a player, especially if you go back two or three seasons, he was unbelievable. But then, he wasn’t a subject for West Ham.”

“When he is on fire, he is a great player. Is he the sort of striker we would look at? We are going to see. We have our list of strikers.”

Another one who has been linked with a move away from the Reds is Mamadou Sakho. Already out on loan at Crystal Palace, Sakho has been subject to leave Klopp’s side after falling out of favour with the German prior to the start of the campaign. After a dodgy celebration between him and former Liverpool striker Christian Benteke, most supporters, including myself, do not want to see him return to the club.

It is really the case then of offloading the ‘rejects’ and clearing the wage bill for a big summer of spending. Lazar Markovic, currently on loan at Hull City could be one who may be departing the club in the summer, though has impressed whilst at his short stint for the Tigers. The Serbian had come out about his future and if he would be willing to stay at Liverpool;

“We don’t know what will happen yet, it depends on the Liverpool situation. I still have two years on my contract at Liverpool. We shall see.”

Personally, I’d like to see Lazar be given another crack at it with the Reds. Liverpool have lacked pace over the years but the difference you see when you have that pace as shown by Sadio Mane, who has had a massive impact on our season.

After being brought in from Augsburg last summer, Ragnar Klavan has failed to make any big impressions at the back for Liverpool and could be set to leave the Reds, who I am sure will be bringing a couple of central defenders in this summer.

As Klopp is a fan of utilising every player he has, and getting the best out of them, I wouldn’t be surprised if the likes of Kevin Stewart, Ryan Kent, Cameron Brannagan, Sheyi Ojo & Ovie Egaria, whom have all featured under Jürgen Klopp at some point, would remain at the club and play some part next season.

Now the exciting part. As I said earlier, it really comes down to if we get Champions League that will determine the quality of player we can attract. Let’s start from the back then. Firstly, in terms of goalkeepers, it looks nailed on that Klopp will not be pursuing another keeper. With Simon Mignolet impressing in recent weeks and Loris Karius only signing the summer just gone, it looks likely that these two will rotate next season. Though a new goalkeeping coach wouldn’t go amiss.

Since the retirement of Jamie Carragher in 2013, Liverpool have failed to find someone of the same calibre. Since Carragher’s retirement, Liverpool have brought in Kolo Toure, Tiago Ilori, Mamadou Sakho, Dejan Lovren & most recently Joel Matip. All have been suspect to poor defending and having the lack of leadership and concentration that comes with it. The most recent name on the list of centre backs who could make a switch to Anfield is Virgil Van Dijk of, who’d have guessed it, Southampton. The Dutch international has been impressive in the Premier League since joining Southampton and has sparked interest from multiple teams including ourselves and Manchester City. At 25-years-old, Van Dijk is currently valued at £50 million. With FSG supposedly providing Klopp with a huge transfer kitty, Liverpool would certainly be able to fork out the money, however would, personally, be a huge risk to be the answer for solving our defensive issues. Nonetheless, it can’t be argued that since his arrival to the Premier League, he has consistently been one of the top central defensive performers.

Though not being among the same reputation of quality as Van Dijk, Michael Keane of Burnley is another name that has been rumoured to move to Liverpool this summer. Most certainly not a £50 million player, however, it would take a lot of money that he may not be worth paying for. Tottenham Hotspur, Manchester United, Everton and Liverpool have all been rumoured to be interested, but the 24-year-old could cost up to as much as £30 million, money which would be spent better elsewhere.

With James Milner being our first choice left-back ahead of Alberto Moreno, who could also leave this summer, Klopp will hopefully be looking to bring in an accomplished full-back/wing-back. There have been recent rumours of Fulham ‘Wonderkid’, Ryan Sessegnon who could be a potential target this summer. Only at 16-years-of-age, it would be highly unlikely that he would be our first choice at left-back. Aaron Cresswell has been linked to Liverpool in the past and would be one that I would like to see at Liverpool. In terms of full-backs, there is nobody that really stands out who would come to Liverpool. Not that nobody would want to come, but if you are Marcelo for example, you are not going to leave Real Madrid for Liverpool. That’s why I’d like to see an English lad come in and being from Liverpool himself would be an added bonus, especially as we are lacking the Scouse-essence around the club.

With the PFA Player of the year awarded to Chelsea’s N’Golo Kante, there is now going to be a massive hunt from every top team in Europe to find someone that does the job he does. For quite some time now, the name Naby Keita keeps cropping up. The Guinean international has been prolific in the Bundesliga for RB Leipzig. The centre midfielder could be Jürgen Klopp’s answer to provide support in-front of the defence. Keita also pops up with some goals as well as preventing them. So far, this campaign for Leipzig, the 22-year-old has scored 8 goals and made 7 assists in 28 appearances. Whilst he is versatile in all areas of the midfield, as a defensive midfielder, Keita has featured 14 times, scoring 4 and assisting 2. This is one player that I hope Klopp makes a move for this summer.

As I said before, pace has had a huge impact this campaign for Liverpool, with Sadio Mane out injured for the rest of the campaign, it is clear to see that we have been missing his speed. For Klopp, a pacey winger is crucial for next season and the names that have been mentioned are Julian Brandt, Douglas Costa & Alex Oxlade-Chamberlain. Out of the three, Brandt of Bayer Leverkusen would be my preferred choice. I’ve not seen too much of the young German, he has been a name that has been associated with Klopp over the past year and I think would suit the Managers tactics more over Douglas Costa and Oxlade-Chamberlain.

Saving the best until last, now this would be based on if we get Champions League football for next season. Alexandre Lacazette. There has only been minor speculation of the Lyon striker making a move to Liverpool. At 25-years-old, the Frenchman has spent his career at Lyon, but has shown over the past season he may be too good for Ligue 1. For the player himself and for Liverpool, maybe both would be a great fit for one another. Liverpool could be the platform for Lacazette to showcase his current ability and tke it up a level.

So, there it is, a summer wishlist for the players that I think Liverpool and Jürgen Klopp could potentially buy this summer and some players, farfetched or not, that I would like to see at Liverpool. Ultimately, it comes down to how the season ends. Whether Liverpool can get top 4 or not will almost certainly be the key factor into the players we attract in the upcoming window.

Agree or Disagree, or have any other names that you think Klopp should go for? Then feel free to leave a comment, or tweet me at @mquinn1994 or @PaisleyGatesBlg, and let me know.