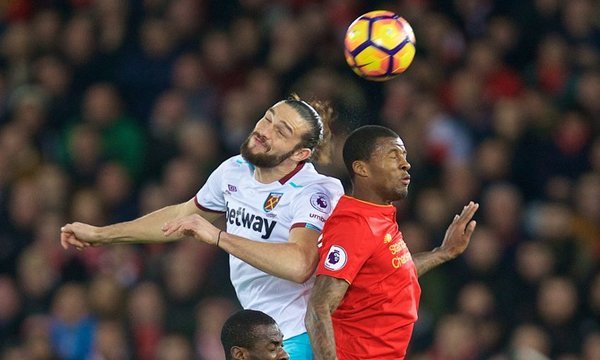 With their spot in the top four at stake, Liverpool square up to West Ham United on Sunday knowing full well that if they get out of London with all three-points, they’ll go into the final match of the season at home to Middlesbrough with their Champions League fate firmly in their own hands.

“I think we have to be relaxed in mind and not create a thought like ‘we have to win, we have to win, we have to win’, because there are some things we’re not in control of,” said Reds midfielder Georginio Wijnaldum, speaking to the club’s official website. “You have to think of a lot of things to win a game, because you play against a team who will not want to lose, so I think it’s better to keep your thoughts on your own performance and the performance of the team,” explained the Dutchman. “The only pressure you have to put on yourself is to use your quality and try to perform as good as possible.”

“As good as possible” hasn’t described Liverpool’s game for some time now. Struggling with injuries and making do with a bench full of youngsters, the Reds have lacked a cutting edge up top over the past couple of weeks. A spectacular overhead kick from Emre Can secured them the points away to Watford FC, but in their fourth meeting of the season, they once again failed to find the net against Southampton as the Saints picked up a point at Anfield. Although their languishing in the lower half of the table, Slaven Billic’s West Ham side are well-drilled defensively and the Croatian manager has been somewhat of a bogey for the Merseysiders — something that’ll be a massive concern come Sunday.

“I think they are, I think they showed that last season,” mused Wijnaldum, agreeing that the Hammers league position isn’t exactly reflective of the quality in their squad. “I think that they didn’t have a good start which is why they’re where they are now, but it’s a good team and a better team than they were last season because they brought in some better players. Everyone knows West Ham is a good team,” added the Reds midfielder. “They will fight to win the game and I think the message for us is that we have to be spot on and 100 per cent concentrated from the beginning, because otherwise it’s going to be really difficult.”