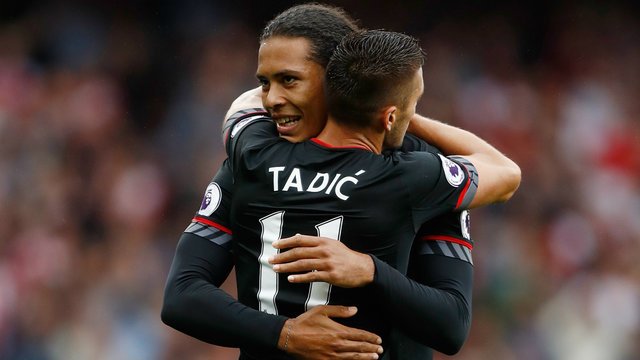 While Liverpool continue to haggle with AS Roma for top-rated winger Mohamed Salah, the Reds are keeping their options open with Southampton man Dusan Tadic the latest wide-man to be linked with a move to Anfield — and with the £13mil release clause in his contract, he’d be an absolute snip compared to the pricey Egyptian.

“We will see. You never know in football. In every club, sometimes players leave,” said the Serbian, when asked if he’d be interested in making a move away from St. Mary’s Stadium this summer. “It is not easy, but this is football. I don’t comment on these things,” added Tadic, clearly lacking a sense of irony. “I have an agent and I have correct things with the club.”

This news, of course, comes hot on the heels of Liverpool dropping their interest and issuing a public apology over their bungled pursuit of Saints defender Virgil van Dijk. For the time being it appears that no action will be taken by the Premier League over the Reds “tapping up” of the Dutchman, but opinions vary over whether or not he’ll end up making the move to Anfield despite all the drama. Southampton legend Matt Le Tissier belives that if he does leave the South Coast, it won’t be for Merseyside, but he’s not the only ex-Saint weighing in on the matter.

“I don’t think that one’s necessarily over. I think they apologised for making an enquiry after it became public,” said former Southampton and Liverpool midfielder Jamie Redknapp. “If Van Dijk is up for sale and he wants to go to Liverpool, and Liverpool have the money to buy him, the chances are he’ll go there. Especially if he’s said he doesn’t want to go to [Manchester] City or Man United,” stressed the Sky Sports pundit. “He would be brilliant signing for Liverpool, he’s perfect for what they need. He can score goals, he’s a brilliant defender. He’s a tremendous talent.”