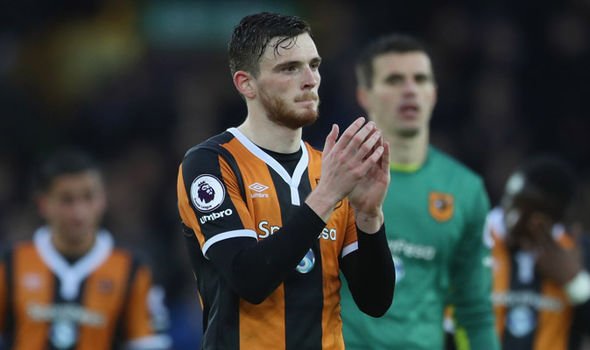 It might not be RB Leipzig midfielder Naby Keita or Southampton captain Virgil van Dijk, but Liverpool look set to complete their third signing of the summer this week with Hull City fullback Andy Robertson edging closer to his much discussed move to Merseyside after the Scottish defender left Hull City’s training camp in Portugal ahead of what’s being talked up as an £8mil deal for the recently relegated Tigers.

It would appear that the exodus from the KC Stadium won’t be abating anytime soon with Robertson the latest in a string of players to jump ship from the newly christened Championship side. Having moved from Scottish outfit Dundee United in a £3mil move three years ago, the Yorkshire club look set to make a tidy profit on the 23-year old, but looking to jump right back up to the top-flight, it’s safe to say that they’d have much rather hung on to a player of his pedigree.

The Reds, for their part, look set to part ways with Alberto Moreno this summer and have made adding both cover and serious competition for veteran utility man James Milner a top priority — boxes that Robertson, who made 115-appearances for Hull, ticks. The Scottish defender may not be a marquee name, but Liverpool manager Jurgen Klopp knows a thing or two about getting the best out of his side and on his day the 23-year old looks a tidy player.

While, of course, there’s been no word from either side, rumour has it that Robertson will hold talks with the Reds hierarchy after beating a hasty retreat from the Tiger’s camp in Portugal. A medical, if all goes well, could be set up for later in the week and though he’s unlikely to hook up with the squad in Hong Kong for the remainder of the ongoing Premier League Asia Trophy tournament, Klopp will no doubt be keen to get him on the pitch and training ahead of the club’s crucial Champions League qualifier.