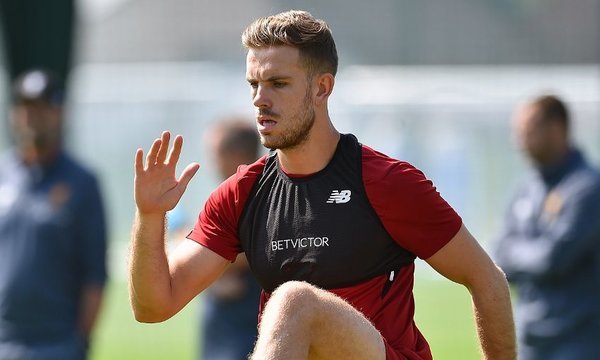 Liverpool boss Jurgen Klopp has expressed his concerns about the state of the pitch at the Hong Kong Stadium ahead of the Reds opening match of the Premier League Asia Trophy tournament against Crystal Palace with the German manager obviously hoping to see his players — including club captain Jordan Henderson — make it through the match and off the water-logged surface unscathed.

“I feel good. I’ve got a few more weeks to build on my fitness but my body feels good,” said the Liverpool skipper, speaking to the club’s official website on their first day of training in Asia. “I got through the last couple of games, which was a good confidence boost to get going again. I look forward to the next few weeks and hopefully I can go from strength to strength and be ready for the first game of the season,” continued Henderson, looking ahead. “I’m just happy that I’m back training with the lads and playing games. I have been out for a while so I still think I’ve got a little bit more to go in terms of my general fitness and match fitness.”

After spending the remainder of the season on the sidelines with a foot problem following the 2-0 win over Tottenham Hotspur back in February, the 27-year old has only just returned to training. Playing 45-minutes of football in both the win over National League side Tranmere Rovers and the draw with League One outfit Wigan Athletic in Liverpool’s first two pre-season matches, the skipper is slowly working his way back to full fitness — something that hopefully won’t be derailed by a soggy pitch on Wednesday.

“The previous two matches were good for us, starting back in pre-season, good games for us to get fitness and get going again,” stressed Henderson, obviously looking forward to pushing himself a bit more. “It’s a step up with Premier League teams,” added the skipper. “They will be good games for us, for fitness and technical and tactical stuff. We’re looking forward to it and hopefully we can win.”