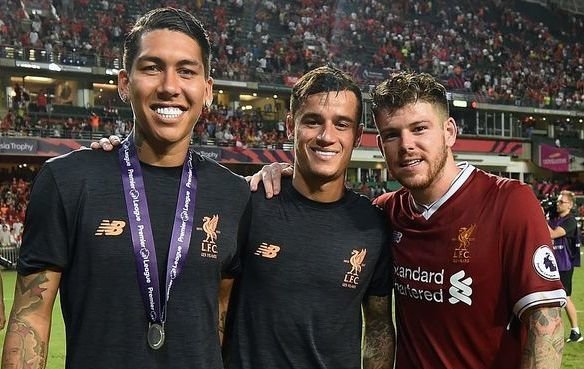 Liverpool talisman Philippe Coutinho put in yet another virtuso performance as the Reds downed Leicester City to claim the Premier League Asia Trophy in their final match of the Asian leg of their pre-season program.

The Brazilian, who was the subject of a £72mil bid from Catalonian giants Barcelona earlier in the week, was the catalyst for Liverpool’s comeback after Foxes attacker Islam Slimani opened the scoring. Teeing up Reds new boy Mohamed Salah to head home before whipping in a picture perfect curler of a his own, Coutinho displayed perfect poise as the Anfield outfit ran out winners in the Far East. The 25-year old, for his part, remains committed to the cause despite near constant speculation over his future and the club, for theirs, insist that they won’t bend to Barca’s will.

“The problem with these things is that whatever I say it always leaves a little bit of speculation,” said Reds boss Jurgen Klopp, once again forced to answer questions about the Brazilian. “If I say he is not for selling, he is not for selling. There is nothing else to say. It’s a club decision, it’s my decision. That’s how it is,” added the German manager matter-of-factly. “I can say 20 times, he is not for sale. If you ask the other question the other way and I say, there has been no assurance, you make the story the other way. There is no story for me.”

Never one to shy away from a fight, Klopp is ready to stick to his guns. Having confirmed that he’s held discussions with the Brazilian about the overtures coming from the Nou Camp, he’s not just blowing smoke until they come back with an improved offer. Although he’s insistent that this one is done and dusted, it’s safe to say that this isn’t the last we’ll hear about Barcelona’s interest in Coutinho — more on this as it progresses.