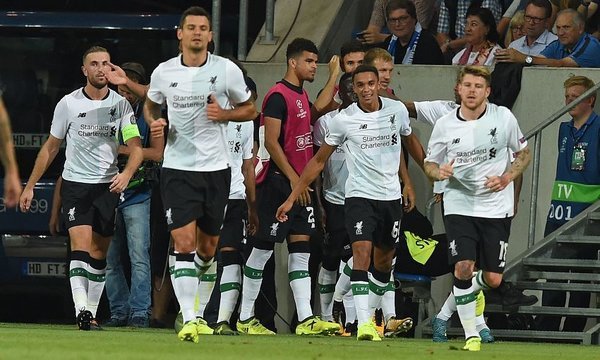 Thankfully the positives outweigh the negatives as Liverpool take a slender advantage in to the second leg of their Champions League play-off tie with Hoffenheim after hanging on to claim a 2-1 victory over the German side at the Rhein-Neckar-Arena — their first loss at home since the final day of the 2015-2016 campaign.

First of all, anywin in Europe is a good one and leaving the continent with two away goals in the bag makes the result even better, but familiar failings from the Anfield outfit made for a frustrating if not entertaining evening. Liverpool ‘keeper Simon Mignolet saved Dejan Lovren some early blushes after the Croatian’s clumsy challenge tripped up former Arsenal attacker Serge Gnabry in the box, but Andrej Kramaric’s resulting penalty was one he’ll do well to forget with the Beligan shot-stopper on point to deny the ex-Leicester City man.

Early nerves abated, the Reds found the go-ahead goal from an unlikely source in an unlikely fashion with Champions League débutante Trent Alexander-Arnold whipping a free-kick past Hoffenheim goalie Oliver Baumann to send the Travelling Kop in to a frenzy just past the half-hour mark. James Milner’s deflected cross would add an own goal and some breathing room in the second half, but the visitors should have been well and truly away by that point with both Mohamed Salah and Roberto Firmino missing glorious chances to make this more a formality than a contest.

And, of course, we’d be made to pay for being wasteful at one end and lax at the other; Hoffenhim boss Julian Nagelsmann set his side up to control the game and though they did just that, they looked to be heading for the exit doors with nothing to show for it only to be granted the kind of gift that only Liverpool’s back-line can give. The diagonal ball in to the box was causing them problems all night and persistence from the hosts finally paid off for them when Mark Uth — being played onside by Lovren — controlled well before firing a powerful shot past Mignolet.

“Hoffenheim had a specific plan to play. We gambled a little too much on the wing, it was a little dangerous in the first half, but as always when we play football, we found spaces in-between and created wonderful chances,” said Liverpool boss Jurgen Klopp, speaking to BT Sport. “The result is OK. The first half is done and if you said before the game we would win, I would take the result,” added the German manager, knowing his side not only wasted too many opportunities, but did themselves no favours by giving up a late goal. “We need Anfield, what an intense game for both sides. I am looking forward to a European night at Anfield. Only the person who does not know about Hoffenheim can be surprised by this.”

Having finished fourth in the Bundesliga and only an inch behind Borussia Dortmund, it was fair to assume that the Sinsheim side would be no pushovers and they showed just that on the night. We might carrying a nice lead in to the second leg, but Hoffenheim will be looking to open up and attack when they visit Anfield — something that could either work to our advantage or see us exit this competition before we were ever officially in it.