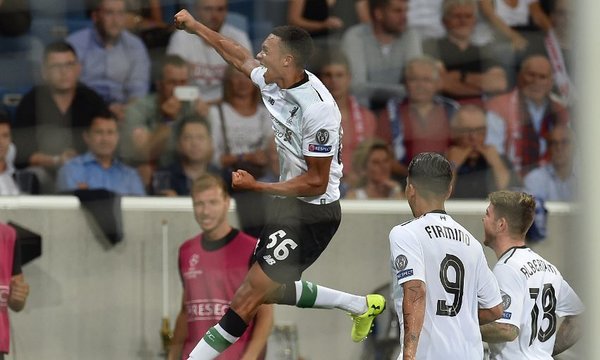 It’s somewhat likeable; like when we watch Diego Costa doing Luis Suarez-esque things and hate him.

He's acting like a mini Klopp – and I like that – but, for me, he needs to show Anfield some respect. https://t.co/CXFpg89C1e

At any rate, Julian Nagelsmann will have riled up the Kopites and the atmosphere at Anfield should be ferocious for Hoffenheim’s second appearance in the Champions League.

The opening fixture of the tie was held in Germany – you can read our reaction of Liverpool’s victory here – and there were more positives to take away from the game than negatives.

It was the usual spiel for Liverpool; Dejan Lovren and Alberto Moreno were, for the most part, our worst performers and our attack looked threatening – it’s a shame, though, that Roberto Firmino was unable to get on the score sheet but he did receive a nice welcome back to his former German home.

More spiel to come in the injury news; Phil Coutinho is still recovering from his sore back and now a new illness, which Jurgen Klopp mentioned in his most recent press conference. Hopefully Phil is back to his usual self soon in the red shirt.

Nathaniel Clyne and Adam Lallana are still spending time on the sidelines given their long-term injuries but it should only be another two or three weeks until we have Clyne back.

Even if Trent Alexander-Arnold is doing his best to keep him from returning.

Andy Robertson’s impressive debut against Crystal Palace over the weekend should insure him a place in Klopp’s squad over Moreno, so I expect the Scotsman to partner Trent as the full backs.

And, oh yeah, Adam Bogan is still out with his ACL injury.

Liverpool have Daniel Sturridge, Divock Origi Dom Solanke and Firmino available going into the game and it’s bloody brilliant for Klopp to have options.

I expect the ‘second half’ to be a typical European evening at Anfield – an abolsute nightmare for the team we’re hosting.

Nagelsmann has been mouthing off, saying it does’t matter that they’re playing at Anfield and that their away record is impressive…I bet it is when you didn’t play a club that wasn’t German last season.

At any rate, I think Liverpool will give Hoffenheim a bit of a lashing at Anfield and, come the full-time whistle, I think the scoreboard will say Liverpool 3-1 Hoffenheim.

If you’d like to strongly disagree with me or remind me of what I’ve written, when Hoffenheim knock Liverpool out of the Champions League before we even play a decent team, you can find me on Twitter – @StevenCarsonNR