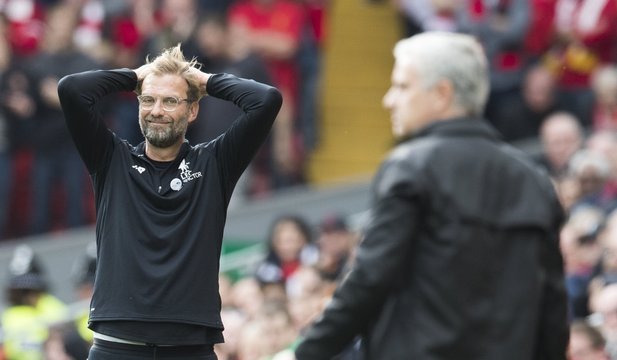 Often billed as a showcase for the Premier League as a whole, Liverpool squaring up to Manchester United failed to deliver in the entertainment stakes yet again as the two sides ran out their fourth draw on the hop. Instead of watching predictable Jose Mourinho park the proverbial bus, it would have been much more fun to play free slot machines — or, you know, see the visitors make a match of it.

“Maybe we didn’t create enough chances, but the problem is that everything you ask is always underlined with negativity. That’s how it is because of our situation,” said Reds boss Jurgen Klopp, sounding agitated. “They defended with nine players in and around the box, that’s completely OK. I don’t judge this. It’s just that it makes our job a little bit more difficult,” continued the German manager. “Could we do better? Yes. Is it really likely that you do a lot better in this game? I don’t think so. My job is to ask for what I can get and not to ask to play like Barcelona after three 6-0 wins in the last three games,” added Klopp. “Play as good as we can: they did and we will carry on.”

Refusing to gamble and playing for a point, United prioritized staying compact over being adventurous and registered only a single shot on target in the process. The Reds, on the other hand, were their usual attacking self, but their poor run of form in front of the net continued as they failed to beat David de Gea en-route to sharing the spoils with their bitter rivals.

This, of course, is becoming a habit for the Anfield outfit and while Klopp might think that they couldn’t have done much better, others have a completely different opinion.

“Jurgen Klopp made changes but he still kept the three-man midfield the same,” explained former Liverpool defender Jamie Carragher on Sky Sports. “Manchester United showed such a lack of ambition it was worth taking a risk by leaving Coutinho on and bringing on another attacking player,” mused the Sky Sports pundit. “It’s not easy as a manager but I’d have taken that chance earlier and the substitutions shouldn’t have been just player for player, but more tactical,” stressed the Scouser, clearly disappointed with the result. “It would have given Liverpool an extra attacking player on the pitch – it could have cost them the game, but it could have won them the game – but the position Liverpool are in, it was a game they had to go for.”