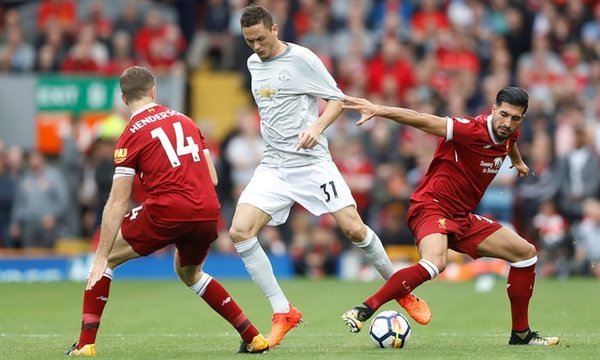 In what’s become an increasingly familiar spectacle, Liverpool were forced to share the spoils when Manchester United came to town with their visitors more than content to sit back and play for a point with the fear of losing out far greater than the desire to win.

“We deserved more than a point. Again, we showed the quality from the first minute that we were a better team than Manchester United today,” said Liverpool defender Dejan Lovren, speaking to the club’s website. “Unfortunately when you don’t score and when they have a good goalkeeper like De Gea… it’s just unfortunate we couldn’t get the goal and take the three points,” continued the Croatian, treading in to familiar territory. “But we need to keep our heads up and move on. We have important games now in front of us, but we need to learn about today that we can play against the really deep-defending teams.”

The story, as usual, is in the numbers — United, employing Jose Mourinho’s well worn “big match” tactics, could register only a single shot on target throughout the 90-minutes and conceded 62% of the possession to their hosts, happy to stay compact and let the Reds run the show. Unfortunately, over the past couple of weeks, it’s become one that’s growing tiresome with Liverpool’s frustratingly wasteful finishing combining with some excellent goal-tending from David de Gea to keep this one scoreless.

“We have to win that game because we dominated for 90 minutes. I think we had good chances and United had one shot on target with Lukaku,” explained Reds midfielder Emre Can who missed arguably the best chance of the match. “It’s the same story like before the international break but we have to go again on Tuesday because I think it’s just a small, small step and then we will come in the right direction again,” stressed the German international, keen to get things going again when they face Maribor in the Champions League on Tuesday. “It’s too early [to make judgements], nothing is over yet and we have to believe in ourselves. We have to win the next game.”