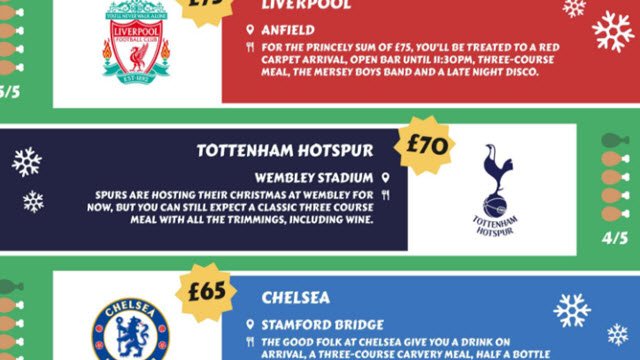 While the rest of Europe is winding down their domestic football and getting ready for a much needed break, the Premier League is doing the absolute opposite with the busy Festive Football fixtures just around the corner. A steaming cup of tea, sarcastic Christmas wishes for your rivals and maybe even a Santa hat or twelve will be the order of the day, but that’s not the only way that clubs in England celebrate the holiday season.

It’s a bit on the pricey side, but for £75 you can party down at Anfield as Liverpool throw a next level Christmas bash — red carpet arrival, open bar until 11:30pm, three courses of grub, a live band to get you on the dance floor and a DJ to keep the festivities going late.

Around the league it’s a similar story and the good people over at https://www.sbo.net have put together a handy info-graphic so you can see how each club is celebrating the holidays. Between the mince pies at Arsenal, the booze at West Ham United and the casino tables over in Swansea City, the top flight is doing it right.