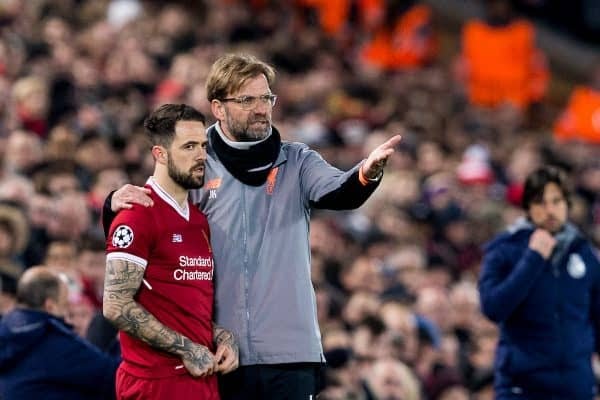 I don’t think I’ve ever cared less about a Merseyside Derby in my entire life. Smack bang in-between our legs against Manchester City in the Champions League quarter-finals.

It’s a great opportunity for Everton; Jurgen Klopp will not want to risk his get players — Jordan Henderson will serve a suspension against City at the Etihad so the captain may as well play at Goodison.

I expect Danny Ings and some of the U23 lads to get a run out against Everton actually, there’s a decent chance John Henry will lash his boots on.

Speaking of team news, Mo Salah is apparently fine after coming off before the final whistle in the week but he mightn’t feature in the Derby.

Ragnar Klavan stands a good chance of making an appearance; Dejan Lovren was as good as Virgil van Dijk — if not better, with Joel Matip out for a while Klopp will end to project his best players.

Don’t forget, this is the team that accommodates Ramiro Funes Mori — a man who celebrates getting a red cad after purposefully injuring Divock Origi.

Adam Lallana, Emre Can and Joe Gomez are all unavailable too.

Idrissa Gueye is currently getting over hamstring injury but will face a late fitness test to see if he can start against Liverpool.

You may notice both clubs recently hosted the Champions-elect with wildly different outcomes.

This one is very hard to call; if the same Liverpool that dismantled City takes on Everton then it’s a bloodbath.

However, it won’t be the same Liverpool. It may still be enough though but Everton’s home record this season is impressive.

No matter what anyone says, Liverpool aren’t thinking too much about the Merseyside Derby, they’re thinking about City next week.

With that being said, my prediction is Everton 2-2 Liverpool; this is the Blues’ last chance at winning anything meaningful this season and they’re going to push the Reds hard.