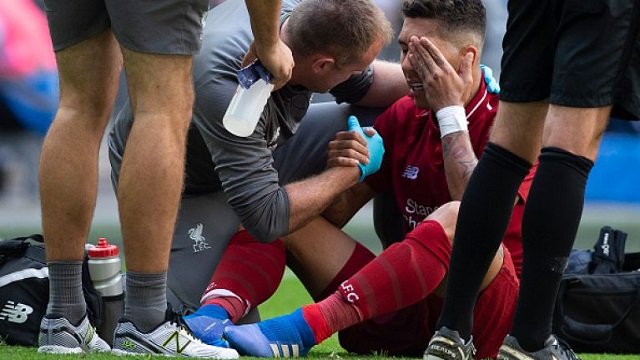 If there was one dark spot to come out of the 2-1 win over Tottenham Hotspur at the weekend, it was seeing Roberto Firmino helped off the pitch with an eye injury following a clash with Spurs defender Jan Vertonghen with 15-minutes left to play.

A first half header from Georginio Wijnaldum, his first away goal in the Premier League since joining the Reds, gave the visitors a deserved lead before Firmino potted the eventual winner 10-minutes after the break. Tottenham attacker Erik Lamela would set up a tense finish when he pulled one back from a tight angle deep in injury time, but there’d be no late equalizer as the Merseysiders left the capital with all three-points and their 100% record intact.

Although we got positive news almost immediately after the match, Liverpool boss Jurgen Klopp has remained non-committal over whether or not the Brazilian will be able to take part when Paris Saint-Germain visit Anfield in the Champions League on Tuesday — news that will no doubt shift the odds on the new customer betting offers being rolled out before kick-off on Wednesday.

“No idea, to be honest. He is much better,” said the German manager. “We all see the picture and we were massively worried. But all these worries are away so he will be fine. If he will be fine for tomorrow, I don’t know in the moment,” continued the gaffer. “We are obviously in close contact with him and it improved already – but in this moment I can’t say if he will be available for tomorrow.”

The Reds have a tough Champions League draw with Napoli and Red Star Belgrade for company, but PSG are without a question their biggest competition in the group. Much like Liverpool, the French juggernauts have started the season with five wins out of a five outings and sit on top of Ligue 1 with an already commanding lead. If the Merseysiders are going to knock them down a peg or two, they’re going to have to be at their best and will have to rely on more than just the front three to pitch in and score goals.

“He’s [Wijnaldum] a goalscorer, he’s shown that before and he’s pretty good with his head so it was nice for him to score and that’s what we need as well,” said vice-captain James Milner, praising the Dutchman and calling on his teammates to keep their eyes on goal. “Obviously we had a lot of goals from the front boys [last season] and I’m sure we will again this year, but it’s important that we try to take as much pressure off them as we can and contribute with goals all over the field.”