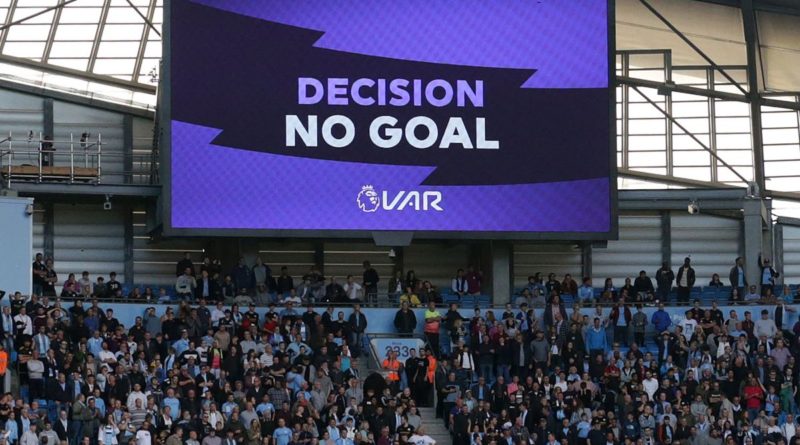 In the eyes of traditionalist football fans, 2019/20 will go down as the season that the Premier League finally became the destructive nightmare that many feared – but is the situation as bad as people believe?

Even before the October international break of VAR’s maiden campaign, there have been plenty of flashpoint moments and talking points. Arguably the most notable example of VAR’s impact to date was witnessed as early as the second game week, when Gabriel Jesus’ last-minute ‘winner’ at home to Spurs was chalked off.

The reason for that was Aymeric Laporte’s apparent handball, though it merely brushed his arm as it made its way to Jesus. While this sort of decision is nothing new, the physical aspects of that infringement did not completely match those which describe a handball in the current rule book.

If that decision is to be the new party line of VAR, then it undoubtedly seems to favour the defending team. It is a trend that grown long before the advent of VAR, with goalkeepers now consistently favoured 50/50 aerial duels with attackers, when once it was simply ‘tough luck’ if a goalkeeper was clattered and conceded a goal.

In an age where the deliberate vs accidental handball debate continues to simmer, this seems to be a pressing issue that only VAR can claim to have rekindled. Certainly, when it comes to football spread betting, people can make significant losses or gains on the decision of a linesman, and as such, perhaps it was destined for such a debatable decision to come during a clash of top-six peers.

Be Careful What you Wish for

Jesus’ disallowed goal could potentially have massive ramifications on the title race, even at this early stage of the season.

However, the fanbases of some other clubs, particularly Aston Villa, feel that they have justifiable reason to show open hatred for VAR. However, there have always been calls for better judgement from officials, and it is these calls that stand as one of the reasons that VAR has been implemented. With the primary aim of gradually eliminating all doubt and controversy in professional football, it enjoyed some better moments at the 2018 World Cup, particularly in the group stage.

Those same fans who decry VAR as the final insult to a game already coached and officiated to death may wish to think back, to flashpoint moments such as the penalty foul on Antoine Griezmann, and those on Christian Cueva and Viktor Claesson.

Ultimately, it appears as though the main issue right now is how VAR correlates to the current rulebook. Regardless of what fans may think, only a thorough revision of it in relation to VAR can stop this new technology becoming the villain that finally killed the spirit of the beautiful game.

While previous years have seen many a roar silenced by the linesman’s flag or a referee’s finger, VAR has now made it the norm for fans to cheer twice. These days, the cheers for an inch-perfect headed goal are somewhat muted, with VAR scrutinising for any ‘climbing’ or other forms of illegal physical contact in the build-up or the execution.

For the foreseeable future, goals from free-kicks and corners will be subject to the same scrutiny, with the power to penalise for even the slightest nudge now within the remit of VAR. Even the offside rule is being redefined by modern technology, and merely being in front of the last defender is not enough these days. Now, it seems, even having a toe ‘offside’ at the moment the ball is played is enough to see the game held up for minutes as individual frames undergo intensive analysis.

With VAR making this much of impact, many fans are led to question just how much this will damage the game. If a toe is offside, will players start deliberately choosing smaller boots at the cost of their key qualities? If a hair on the armpit is offside, will the waxing industry do a booming trade in the Premier League?

While these scenarios obviously sit on the more extreme end of the scale, there is no doubt that VAR has already proven a controversial addition to the world’s greatest domestic league. With so much investment in this new technology, nobody against its presence should ever hope for removal. Yet given the for-now chequered relationship between VAR and the rulebook, the main problem does not seem to be the technology itself.