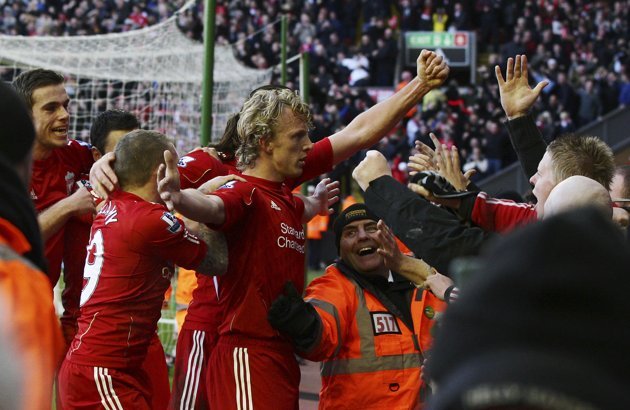 FA Cup Match Reaction
January 29, 2012February 10, 2012 Steven McMillan 7 Comments 2-1 wins, Andy Carroll, Daniel Agger, David De Gea, Dirk Kuyt, FA Cup 4th Round, Jose Enrique, Kenny Dalglish, Manchester United, Park Ji-Sung, Patrice Evra, Paul Scholes
Dirk Kuyt found the back of the net for the first time this season to send Manchester United crashing out of yet another competition and propel the Reds into the 5th round of the FA Cup. A header from Daniel Agger and a Park Ji-Sung effort saw the teams the heading for a replay before the Dutchman, who carried on his welcome habit of scoring against United, ran onto an Andy Carroll flick-on to volley home. Two massive cup meetings and two victories for Kenny Dalglish. Two successive matches with two different teams from Manchester and two victories on the bounce. Writing that sure does feel good.

With off field tensions exacerbating a fixture that is historically vitriolic, the biggest match in England took on an even greater air of hostility that looked to overshadow the football itself. It was hard to tell if the press were more interested in what would go on the stands than the actual proceedings on the pitch. Although, it all seemed a mere distraction from what they were genuinely interested in, much to the chagrin of the headline mongers, there was football played today.

Without a recognized holding midfielder, Jamie Carragher started in front of the back four to add an extra layer of protection against a United attack that was aiming to strike early to settle the nerves.
A long range strike from Maxi Rodriguez was followed by successive chances for United through Ryan Giggs and an Antonio Valencia shot bouncing off the upright. Despite the visitors winning the possession game, they would find themselves a goal behind in short order.

Andy Carroll, starting up top by himself, took up residence in front of United ‘keeper De Gea and attracted the kind of attention he was used to in a Newcastle shirt as a host of opposition shirts swarmed around him. Kelly and Skrtel joined in on the festivities surrounding the young Spaniard and with the focus squarely on the box, Daniel Agger was able to sneak onto Gerrard’s corner and put the Reds ahead against the run of play.

Beating Manchester City two days ago to secure a place in the Carling Cup final was a coup in itself, but a victory, especially in a cup competition, over our oldest rivals remains the only result that truly matters. For all the possession the visitors were enjoying, the didn’t look like doing all that much with it until a Jose Enrique error allowed Rafael to cut the ball back for a ghosting Park Ji-Sung to lash in and put the visitors back on level terms before the break.

Dalglish has been criticized for his lack of substitutions when a change is needed, but swapping out Carragher and Maxi for Kuyt and Adam in the 63rd minute proves he’s better at reading the game then a section of armchair managers would have you believe. The midfield battle, previously being dictated by an uptempo Paul Scholes, was quickly shifting in the other direction as the now un-retired ginger began to tire and was ultimately withdrawn after Dalglish again shuffled his deck by bringing on Bellamy for Gerrard.

With the middle of the park a no-fly zone for the visitors, Liverpool was enjoying the run of play with Andy Carroll in particular having one of his better matches despite being isolated for much of the first half. It’s long been said that the mountainous Geordie needs a partner up top, or in the very least players running into space from the midfield, to truly be effective and he put an exclamation point on the end of that as time began to tick down.

With a replay on the cards, Pepe Reina sent a long ball deep into the United zone from a goal kick that was instantly latched onto by Carroll. He had won a considerable number of his aerial duels today and with this one proving to be the vital one, he layed a perfect flick into the path of Dirk Kuyt. Patrice Evra, who was booed from the get go, must have lulled off to sleep, letting the Dutchman run onto the ball as it bounced into the box.

Kuyt has found chances difficult to come by this season, with Dalglish preferring his summer signings over the aging forward. When he has stepped out, he hasn’t quite been himself, but with power winning out over placement, the Dutchman wrapped it all up with a neat volley in front of the Kop as De Gea looked as helpless as ever. He’s often been described as a big game player and his display today will only enhance that reputation among the Liverpool faithful.

Despite the distraction of the off field circus, over both matches with both Manchester clubs, the improvement in this side has been laid bare for the world to see. In my Carling Cup semi-final preview, I laid belief solely on the fact that when a team that matters lines up against us, we bring the game we all know this side is capable of. It’s those blips on the radar like that against Bolton only 3 days before the match with City that makes us question whether or not we’re on the right path. Today, it was like finally discovering GPS.

Neither win is going to count when the points get tallied up in May, but we’re on our way to Wembley for a meeting with Cardiff City in the Carling Cup final and we just eliminated our oldest, fiercest rivals in the FA Cup; I do believe Kenny earned his keep this week.

7 thoughts on “But, Sometimes You Get What You Need”